"We're just getting started on the beans," said his brother Jason in the farmyard just down the road.

The Kontz brothers aren't the only ones with a lot left to harvest. The harvest moon on the weekend shone on other farmers who started to harvest their soybeans. USDA reported Monday in crop progress reports that nationally 4% of soybeans are harvested, compared to 6% a year ago and the five-year average of 5%. For South Dakota, about 2% has been harvested, equal to last year and 6% for the five-year average.

Some South Dakota elevator managers are reporting soybeans being cut in their areas, and already at least one location is dumping new-crop beans, earlier than usual.

Jason Kontz said their crop seems to be progressing about the same as in the past, although the yields look better.

As for corn, USDA reported in South Dakota 3% is harvested, compared to 1% last year and 6% average.

"We took some corn out for feed yesterday," Kontz said. He added it was ideal at 35% moisture since it was for their cattle. Their farm has a 60-40 ratio of corn to soybeans because of their cattle.

The crops seem good so far. "Every week we got a half-inch to an inch of rain, just right," he said. The timely rains for the season have boosted yields. He said the five-year average is usually 170 to 190 bushels per acre on the corn; this year he figures they'll get 190 bpa or better.

As for the soybeans, with only an hour into combining them, it was too early to estimate their yield but he still felt they would do well. Kontz said he had heard of neighbors that were getting 40 to 80 bpa. "Some have had in the 70s. I heard of 40 the other day. The 35 to 40 (bpa) is usually grown on lighter ground."

Kontz said their crop is now getting too much rain. "We got eight-tenths of an inch just the other night," he said. However, he knows of places that got as much as 3 to 6 inches in the last few days. He joked about how he'd be fine if the rain would now shut off until November or December so the harvest could be done. 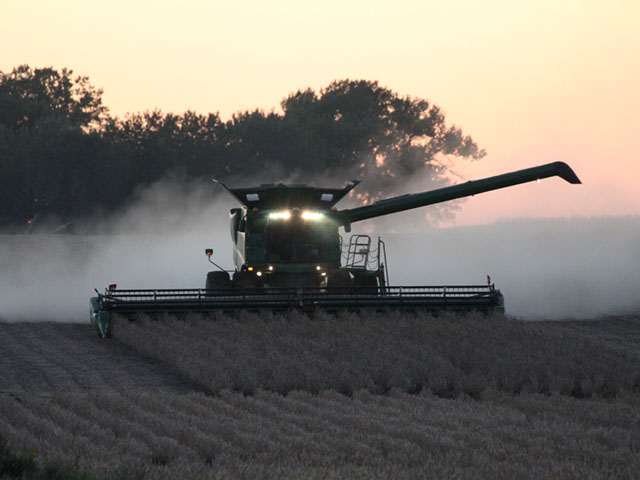