This blog item is being posted during the weekend of July 22 -- which is in the middle of an exhausting heat wave across the entire central U.S. Basically the entire Corn Belt has some kind of hot-weather bulletin in effect, and many areas have excessive heat warnings due to air temperatures set to surpass 100 Fahrenheit and heat index values to reach 110F or higher.

But, despite that exhausting and dangerous heat, crop prospects remain high. Crop condition ratings the weekend of July 17 were the highest at this time of the season since a couple years ago when the latest corn yield record was posted -- and are on par with the year 1994, which was a near-perfect season and boasted yield records.

What's going on? How can crops do so well when they had to slog through a very warm month of June, and now in July get slapped with a heat wave that is the strongest in four years and is very reminiscent of the torrid and damaging summer of 2012? This kind of sustained warmth and the surge of heat cannot be good for crops -- after all, corn is pollinating under this heat. And soybeans are trying to flower and set pods.

The answer has two components, both related to moisture. First, despite the hot-weather upper-level high pressure ridge that's moved out of the Chihuahua Desert toward the Midwest, there are still episodes of rain that pop up and take in a good-sized area before dying out. We just saw that during Thursday night into Friday morning, when a round of thunderstorms formed over southern Wisconsin on Thursday evening, and then tracked straight south through all of Illinois, the western half of Indiana, the southeastern one-third of Iowa, and the northeastern one-third of Missouri with amounts of as much as one-plus inches. The hot upper-atmosphere high has not shown the capability to shut things down at its edge when it comes to rainfall potential.

Secondly, most of the Midwest has at least adequate soil moisture, and several districts have surplus supplies. That is a notable buffer against hot-temperature stress. Purdue University agronomist Dr. Bob Nielsen pointed that out in an extension article on drought and heat effects on corn pollination:

"Growers often worry about the direct effects of high temperatures on the viability of the pollen grains. Indeed, pollen is likely damaged by mid-90s or greater temperatures, especially when accompanied by low relative humidity. Temperatures over 100 degrees may literally kill pollen.

"The saving grace of the matter, however, is that pollen shed typically occurs during early to mid-morning hours before temperatures climb to such dangerous heights. Furthermore, pollen maturation occurs over time and 'fresh' pollen is available every morning until maturation is complete. Successful pollination can occur even during lengthy periods of high temperatures if soil moisture reserves are adequate to meet the plants' demands."

With these features -- a weaker upper-level ridge and ample soil moisture supplies -- corn and soybeans have been able to perform, and continue to perform, very well, with a scenario that is almost completely opposite to the exhausting year of 2012. 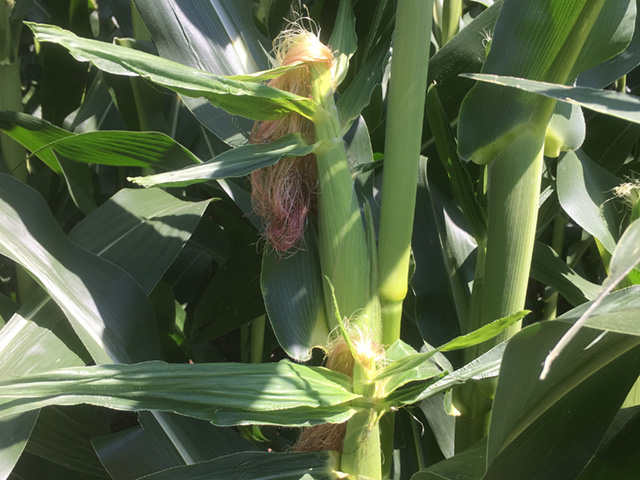 sstamm@bwtelcom.net
7/26/2016 | 8:47 AM CDT
I think the one thing some people are overlooking is the amount of humidity and length of time it hangs around. I am from southwest Nebraska where it is heavily irrigated. Have soil moisture probes in all of our fields and can tell you that the water usage during this hot spell is definitely not what it traditionally is. The humidity levels have been atrocious for us along with the heat, but I think this has definitely allowed the corn to cope quit nicely. The dryland hasn't even been rolling up in the sand, which tells me the humidity is playing a key role.
Darle Baker
7/23/2016 | 6:27 AM CDT
The radar rains have been good but all of my rain gauges have holes in them reading about 20 perecent of radar rains.