Following are highlights from a blog item called "June 2016 ENSO Discussion: The New Neutral" by NOAA Climate Prediction Center analyst/blogger Emily Becker. It has a good rundown of how the 2015-16 El Nino ended, along with some useful details pertaining to the prospect of La Nina developing this year.

"We're sticking a fork in this El Nino and calling it done. After spending more than a year above average, sea surface temperatures in the central and eastern equatorial Pacific had mostly returned to near average by the end of May. Forecasters don't think we'll remain in neutral territory for long, though. There's an approximately 65% chance that sea surface temperatures will drop into the La Nina realm (more than 0.5 degrees Celsius below normal) by the July -- September period. This chance increases to around 75% by the fall.

"The El Nino/La Nina (ENSO) cycle is characterized by the changes in tropical Pacific temperatures and the corresponding response of the atmosphere. During El Nino, atmospheric changes include weaker trade winds and upper-level winds, more convection and rainfall in the central or eastern Pacific, and drier conditions over the far western Pacific and Indonesia. Over the past few months, the tropical Pacific has cooled off rapidly, and all these atmospheric indicators returned to average conditions during May.

"This El Nino was often compared to the 1997/98 event, because the ocean temperatures in the key Nino3.4 region in the Pacific (central region) followed a similar progression, and the peak departure from normal in the 3-month-average was the same: 2.3 degrees Celsius (4.1 degrees Fahrenheit) above normal. However, this event differed from that one in a lot of ways, including the impact on United States precipitation during the winter.

"In short, as you've heard many times...no two El Ninos are alike.

"Why am I reviewing all this? Because we don't expect the rest of 2016 to look exactly like 1998 did, either, even though ocean temperatures in the Nino3.4 region (central Pacific) have followed a very similar decline. Just looking at one number (the Nino3.4 index) can give an incomplete picture of the evolution of ENSO events. Even though our forecasts are projections for Nino3.4 ocean temperatures, forecasters take a number of current conditions into consideration. In other words, if La Nina develops this fall, don't expect it to develop just like the one following the 1997/98 event.

"Both human forecasters and computers are reasonably confident (75% chance) that sea surface temperatures will cross the La Nina threshold by the winter. However, there's a fair bit of uncertainty still about how the La Nina would progress, and forecasters are currently favoring a weak or borderline moderate event.

"This spring, the amount of cooler water under the surface of the tropical Pacific is substantial, and it's been rising up to the surface. This is a source of confidence that sea surface temperature anomalies will continue to cool through the summer.

"Dynamical models (large computer simulations that use atmospheric and ocean physics to make predictions) predict that Nino3.4 (central Pacific region) temperatures will cross the La Nina threshold soon. They don't, however, foresee a continued steep cooling. Most forecasts from the North American Multi-Model Ensemble are in the region of about -1.25 degree to -0.5 degree Celsius below normal through the Northern Hemisphere winter. (That would indicate a weak La Nina)

"Just like it did with El Nino, the atmospheric response to the changed sea surface temperatures should reinforce La Nina. La Nina is characterized by a stronger Walker Circulation, where warm air rises in the far western Pacific/Indonesia, heads eastward at upper levels, descends to the surface over the eastern Pacific, and blows toward the west as the trade winds. Stronger trade winds cool the surface and keep the warmer waters pooled in the western Pacific. Over the summer, we'll watch this response carefully, for clues about how La Nina might evolve...A major source of uncertainty in this outlook is the rate at which La Nina may develop and intensify." 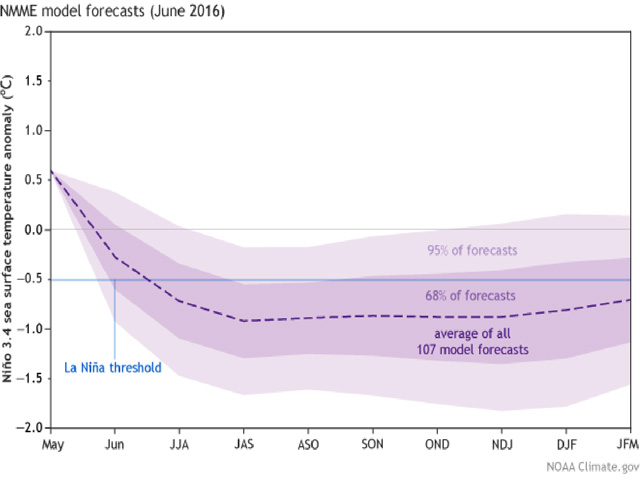