The Australia Bureau of Meteorology declared this past Tuesday that the El Nino event has ended as the parameters of sea surface temperature, southern Oscillation Index (SOI), trade winds and cloudiness near the date line have all returned to normal.

The question that is now being asked is what does a neutral Pacific mean for the current growing season in the U.S.? Also what would happen if sea surface temperatures drop to weak La Nina conditions over the summer as some models are indicating?

In trying to answer this question we will start with an assessment of where the pattern has been during the month of May. The pattern we currently see is behaving like an El Nino pattern with an active southern branch of the jet stream across the central and southern U.S. Subtropical high pressure has been virtually non-existent in the U.S. this spring, remaining off to the south over Mexico. This has allowed for an active rainfall pattern over much of the central and southern U.S. The northwest Midwest, Northern Plains and Prairies have experienced drier weather under the dominance of stationary high pressure, which allowed severe fires in northern Alberta.

As we head into the month of June we only expect to see some minor changes to this pattern as there is expected to be some lag time between the oceanic end to El Nino and the atmospheric end. We would expect to see some northward shift in the most active rainfall band across the U.S. This would be good news for some of the drier areas in the Northern Plains and Prairies but could lead to disruptions in soybean planting in the Midwest as well as some disease issues to maturing wheat and harvest disruptions in the Southern Plains. 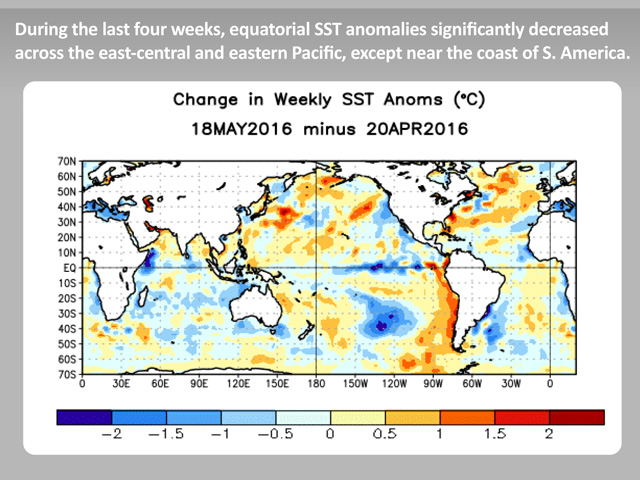 Michael Palmerino
5/31/2016 | 10:16 AM CDT
The north-central states would include the northwest Midwest north and west of Des Moines, the northern Plains and the Prairies. I would not put any faith in year in advance forecasts. They are likely just computer generated statistical forecasts. Mike
Unknown
5/30/2016 | 2:29 PM CDT
Mike, What States, Provinces, would you include in the "North Central U.S.? Our farm is located in South Central Minnesota (west of Twin Cities area), also what is your opinion of the New Weather advisory services that tout year in advance forecasting? I get a lot of links sent to me for their Service. Seems to me that is stretching it a bit Brad Paumen