DES MOINES (DTN) -- The U.S. is taking on an unequal share of the world's humanitarian food aid and other major countries "need to step forward" and help address "the greatest food crisis in our lifetimes," the administrator for the U.S. Agency For International Aid said Wednesday.

Samantha Power, administrator for USAID, in a keynote speech at the World Food Prize Borlaug Dialogue, highlighted the rising costs of humanitarian food aid. After the pandemic hit, the United States spent $10.7 billion dollars in 2020 on foreign humanitarian assistance. This year that figure has topped $15 billion. Just the humanitarian aid to Somalia alone has been about $865 million.

"We need other donor nations to step forward," Power said.

Power added the U.S. has provided 89% of the funding to help the World Food Program deliver food aid in the Horn of Africa. "We are stepping up -- but that is not the division of labor that we need on this earth if we are to be in a position to meet other emergency needs," she said.

While humanitarian aid has soared in costs, agricultural support and investment has declined, Power said. Pointing to costs in a country such as Afghanistan, Power said cultivation packages that help farmers grow wheat can provide a year's supply of staple grains for a family of seven, at just over $150. Cash to purchase the same amount of food at a local market would cost more than $600. And direct food aid would cost over $1,000, she said.

"We know that investing in sustainable agricultural growth isn't just a more sustainable way to fight hunger and poverty; it's cheaper, too," she said

Power stressed the use of greater technology and support for agriculture in countries struggling to meet their food needs. She also pointed to the need for agriculture to embrace adaptation strategies to deal with climate change.

Power said research by 2022 World Food Prize Laureate Cynthia Rosenzweig on climate change "could not be more timely, needless to say, because today, we award the World Food Prize amidst the greatest global food crisis of our lifetimes."

Power said, "There are many culprits behind today's food crisis, you know them well. The COVID-19 pandemic grinding economies to a halt, splintered supply chains, causing huge spikes in inflation, everywhere it seems. Vladimir Putin's invasion of Ukraine, holding hostage global supplies of food, fertilizer, and fuel, denying food to the world's poorest communities -- and that's one of the many conflicts actually that is contributing to hunger around the globe."

Power added, "But, more than any other force, it is climate change that threatens humankind's ability to feed itself."

According to a UN report from last year, the world now faces three times the number of extreme weather disasters each year that we did in the 1980s.

"Those disasters hurt agriculture more than any other industry, with the greatest harm caused to the poorest countries -- those least responsible for climate change," she said. Between 2008 and 2018, natural disasters alone cost developing countries more than $108 billion in crop damage, lost harvests, and those thinning herds."

Power urged other governments to "invest in research and development within their own borders, to partner with private companies and nonprofits to bring new seeds to environments too often overlooked, and to develop regulations and policies that encourage the development of safe, cutting-edge agricultural innovation."

She also called for private companies and nonprofit groups to embrace climate-smart practices on the farm and food fortification projects as well. Power also called on governments and others to "change cultural norms that relegate women to the home and begin dismantling cultural and legal barriers that are holding back our women farmers, or women leaders. Because when we hold women back, we hold everyone back."

Power announced a new $75 million investment in "large-scale food fortification." The project, which US AID is calling AFFORD, will work with food processors, governments, and private-sector companies in the 28 Feed the Future countries and others to add micronutrients to staple foods.

USAID and USDA also launched the Global Food Security Research Strategy on Wednesday. The strategy will focus on investments and research on three areas: genetic improvements of crops and livestock, climate-smart agriculture, and improved nutrition.

To help support gene-editing research in Africa, USDA announced it would invest nearly $3.8 million to support three universities and institutions to use CRISPR to develop new "Striga-smart" varieties of sorghum. The new varieties will accelerate breeding efforts to help protect farmers from weed infestations. Striga is also known as witchweed.

Power had other visits with executives from the John Deere Foundation and Corteva on the sidelines of the event to talk about expanded mechanization in developing countries as well as breeding technology. Power then visited a nearby Corteva facility. Her office stated in a news release, "Administrator Power saw how genetic engineering can help farmers grow their crops more efficiently during a site visit to Corteva, a partner with USAID in more than 12 countries. Administrator Power witnessed firsthand the full cycle of seed development."

Chris Clayton can be reached at Chris.Clayon@dtn.com 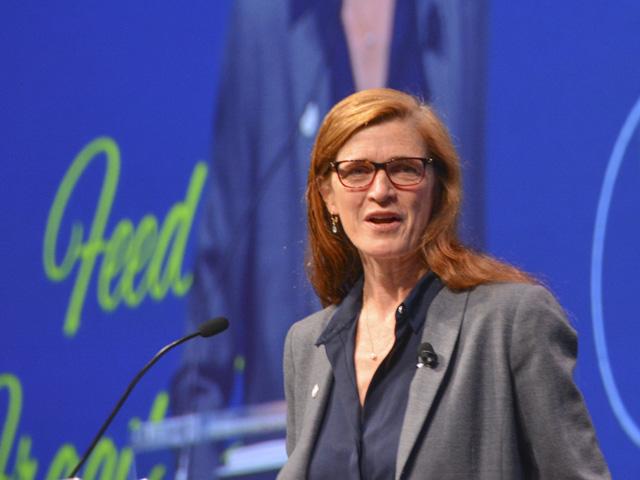