DENVER (DTN) -- Speaking to members of the National Farmers Union on Sunday, U.S. Sen. Jon Tester, D-Mont., said Senate leaders have told him they are willing to bring a pair of bills to the floor this spring to tackle the power of meatpackers in the marketplace, including a bill that would mandate a certain level of negotiated cash trade by large packers.

A farmer himself with roots in Farmers Union, Tester told NFU members about a series of bills he is championing to tackle corporate consolidation. Tester had the perfect audience for his message challenging the influence of corporate consolidation on agriculture. National Farmers Union has been championing its "Fairness for Farmers" campaign to highlight corporate consolidation in agriculture and raise the visibility around those issues. NFU President Rob Larew said some people may be getting tired of hearing about fairness in competition issues, but NFU wants to turn up the volume on the topics, taking the messages more to consumers.

"We know that consumers are hurting, we know they understand that there are problems out there," Larew said. Pointing to comments President Joe Biden said in a video message to NFU, "As the president said, we can eliminate exploitation by bringing fairness back to the marketplace."

After an on-line meeting a year ago, NFU is holding its 120th annual meeting this week in Denver. Tester spoke at the group's dinner Sunday evening.

Tester highlighted he has a "suite of bills" to add more transparency to livestock markets and "reintroduce capitalism into the marketplace" for farmers and ranchers. "We need to make production agriculture for family farmers vibrant once again," Tester said.

Tester said he expects the Senate will take up a bill introduced by Sen. Deb Fischer, R-Neb., Tester and Chuck Grassley, R-Iowa, as well as a bi-partisan mix 14 other senators, at least nine of whom are members of the Senate Agriculture Committee. The bill would require USDA to set regional mandatory minimum cash trade for fed cattle purchased by packers for slaughter. https://www.congress.gov/…

Speaking about the bill, Tester said, "It's really complicated and it's really important. But what we've seen the packers do is -- the packers today are manipulating the cash price. And manipulating in such a way that is forcing down formulas and forward contracts," Tester said. He added, "So it's a win-win-win deal for them, and it takes the farmers and makes them less profitable."

Grassley, Fischer and Tester have been the loudest advocates in the Senate for finding ways to force packers to rely less on contracted cattle and buy more cattle on the open market. The issue becomes regional because certain states have little negotiated cash trade as a dominant packer in the state may contract with a handful of large feeders. Such is the case in Colorado where JBS relies little on cash sales to supply its packing plant.

Tester told DTN the negotiated cash-trade bill will simply boost the cash markets to a level that reduces the risk of price manipulation. "And if somebody else has got a better idea, I'm all ears," Tester said. "But the bottom line is what's really going on right now with Big Four meatpackers is ruining rural America and it's really having some negative impacts. And time is of the essence here. We have to get after this because we're going to lose a lot of ranchers if we don't."

"This bill would give subpoena powers, give the ability to show if they are doing any antitrust activities, and hold them accountable," Tester said.

"I've gotten a commitment from leadership in the United States Senate to take the special investigators act and the spot-pricing bills to the floor, hopefully before spring," he added.

So far, neither bill has gotten out of the Senate Agriculture Committee. Republican staff on the committee for Ranking Member John Boozman, R-Ark., have been asking for outside studies to challenge the idea that more negotiated cash trade would raise prices for producers. After hearing some concerns raised at their annual meeting in January, delegates for the American Farm Bureau Federation reversed their policy to oppose any mandates on negotiated cash trade.

Tester said Boozman is a friend and he's "not going to pick a fight with John," but Tester said committee Chairwoman Debbie Stabenow, D-Mich., has said there will a hearing and a vote on the bills.

Also preaching to the choir, Tester said he has legislation to bring back mandatory country of origin labeling for meat (COOL), which was revoked by Congress in 2015 after the U.S. lost a World Trade Organization case to Canada and Mexico. Tester said he lives within 60 miles of Canada and it's common to see "Product of Canada" labels on food or other products.

"All I'm saying is we raise some great beef in this country," Tester said. "All I want is 'Product of USA' on it. We will win this fight."

Tester also touched on another bill of his that would require equipment manufactures to provide software to farmers to allow them to fix their own farm machinery. The senator noted he hasn't been able to get bipartisan backing for that bill yet.

"All we're asking the manufacturers to do is give farmers and ranchers the ability to do what they've always been able to do," Tester said.

He added, "We're not asking the software to jump up the horsepower. We just want to know the software so when a sensor goes out, we know which sensor it is. And we can go out with a three-quarter inch wrench and pop that sensor out and go buy a new one and pop it back in and our combine doesn't sit out there in the field. Go buy the new one from the back end." 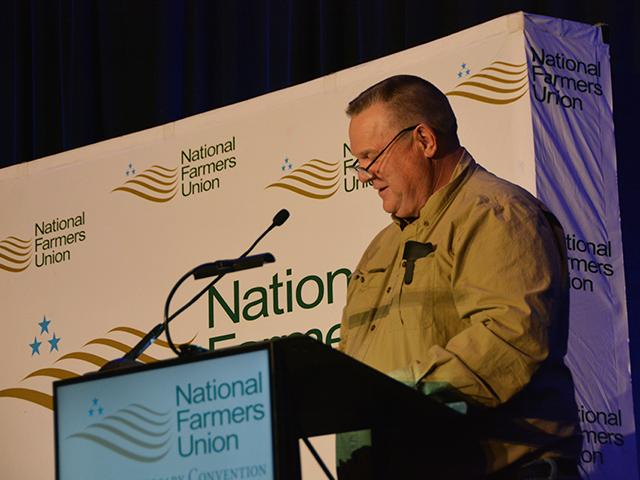