OMAHA (DTN) -- Sitting at a Latino aid center in south Omaha, Puerto Rico's lone representative in Congress on Monday spoke about her determination to get statehood for the island and work on immigration in a bipartisan way.

Nebraska Rep. Don Bacon on hosted Rep. Jenniffer Gonzalez-Colon as the pair met with local Latino business leaders in Omaha to talk about labor and supply-chain challenges, as well as possible legislation in Congress. Bacon and Gonzalez are both Republicans and also ranked among the most bi-partisan Republican lawmakers in the House.

With Puerto Rico's status as a territory, Rep. Gonzalez's title is actually "resident commissioner" of Puerto Rico, meaning she has committee assignments and speaks on behalf of the territory, but Gonzalez cannot vote on the passage of legislation. Gonzalez pointed out she is the only elected representative in Congress for the island of roughly 3.2 million people.

Bacon noted a major focus for Gonzalez is statehood for Puerto Rico, which he said might not be a big issue in Omaha, "but it's the right issue. It's been 120 years and in the last three elections Puerto Ricans have voted to support statehood."

Gonzalez said those repeated votes in Puerto Rico have pushed the issue forward in Congress. "This is a direct responsibility of Congress. This is their jurisdiction." Gonzalez pointed to H.R. 1522, the Puerto Rico Statehood Admission act, which has 77 co-sponsors, including 60 Democrats and 17 Republicans. The bill has had one hearing, but Gonzalez said it's possible that in February a committee could mark up the bill to advance it.

"So we are pushing to have that bill on the floor," she said. "Of course, this is going to be a long process. This is not going to be an overnight issue. We've been waiting 120 years for it." Gonzalez added, "I think the hypocrisy of politicians talking about democracy, democracy, democracy, but you have 3.2 million American citizens by birth who cannot voted for the commander in chief and their representative cannot vote on the House floor."

Gonzalez added there are also a lot of federal programs that do not apply to Puerto Rico because it is not a state. "If you are living in Nebraska and you move to Puerto Rico, you lose access to many of those programs," she said.

Bacon noted the partisan challenges that lawmakers in both parties believe statehood would tip the scales of Congress in favor of the other party. On the Democratic side of the aisle, a lot of lawmakers also want to tie statehood for Puerto Rico to statehood for Washington, D.C., as well.

"On the Republican side you'll hear there's going to be two Democratic senators and five more Democrats in Congress, but Jenniffer's a Republic and they have a Republican governor."

Gonzalez said Puerto Rico would be more "purple" than red or blue.

Gonzalez and Bacon are both members of the Problem Solvers Caucus in Congress, which Gonzalez highlighted by pointing to Bacon's work and support of the $1.2 trillion bipartisan Infrastructure Investment and Jobs Act last November.

"We began that process in the Infrastructure Committee which I am a part off, but it was really the Problem Solvers Caucus who drafted the template of that bill," Gonzalez said. "That was one of the best examples of how you can get things done in a bipartisan way and thinking about how to best represent you community instead of Washington. That is something that you don't see every day."

Bacon was one of 13 House Republicans who voted for the final version of the infrastructure bill, a move that has drawn the wrath of more vocal conservatives, including former President Donald Trump, who keeps advocating for someone to run in a primary against Bacon.

Gonzalez credited Bacon for taking the time to pay attention to Latino issues, including looking for bipartisan solutions on immigration.

"You still have got members of Congress who support the Latino community and one of those is Don Bacon and that's the reason I'm here because of the issues of understanding immigration and understanding the issues about TPS (Temporary Protected Status) or DACA (Deferred Action for Childhood Arrivals), or even infrastructure for Hispanic communities is a big deal," Gonzalez said. She added, "You may see that support in Miami or New York or even California, but having somebody from Nebraska that can actually understand and work on those issues directly is very unusual."

Bacon said a message that works, even when speaking to conservative groups, is that if the U.S. is going to remain strong and competitive then lawmakers need to work more across the aisles. When it comes to immigration, "If we want to remain competitive, and a growing country, we need legal immigration," Bacon said. "Without immigration, we have a declining population, which means we're aging, and it means we're not going to be competitive. If you frame it that way, I think you can get support."

Bacon acknowledged "on the right side of the aisle, there's a reluctance to discuss these things right now when things are so broken at the border."

Gonzalez added the House put aside partisan differences last year to pass the Farm Workforce Modernization Act, which remains stalled in the Senate. Still, Gonzalez said that bill, which passed 247-174 last March, showed the House can work together on both immigration and labor.

"The same challenges are happening in other areas" of the economy, she said. "We should use that as an example to move ahead." 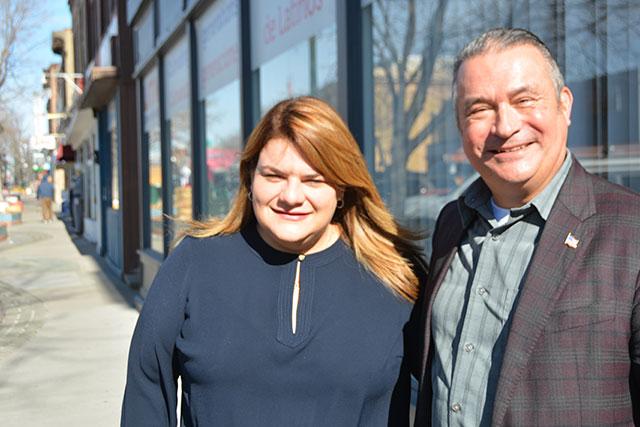