Iowa Sen. Chuck Grassley wants to do what he can to reform the H-2A guest-worker program to bring in legal year-round labor for agriculture, as long as any piece of reform legislation does not include "mass amnesty" for the hundreds of thousands of agricultural workers in the country now illegally.

Grassley, a Republican and ranking member of the Senate Judiciary Committee, spoke to reporters Tuesday morning about a Judiciary Committee hearing set for Wednesday, "Immigrant Farmworkers are Essential to Feeding America." The hearing will include Agriculture Secretary Tom Vilsack, as well as the president emeritus of United Farm Workers of America, an Illinois farmer, an Oregon farmer, a former Department of Labor official, and the president of the National Pork Producers Council.

The hearing is expected to focus on flaws in the H-2A program, which brought in about 275,000 workers in FY 2020, and brought in nearly 166,000 in the first half of FY 2021, the most updated figures from the Department of Labor. Five states typically dominate the numbers of H-2A guest workers -- Florida, Georgia, California, Washington and North Carolina. They account for about 55% of all H-2A jobs. For many farmers and states, H-2A isn't well-suited for their labor needs.

"Employers in Iowa -- animal agriculture, agricultural processing -- is not a seasonal business, and that's what the H-2A program is for is seasonal workers," Grassley said. "So I hear from farmers and business who just can't find people to work."

H-2A should focus on providing access to a stable and legal workforce, Grassley said. But that should include expanding the program to cover year-round agricultural industries. The program should also be streamlined and the red tape reduced to deal with the high cost of using the H-2A program. And any changes to H-2A should also broadly implement the E-Verify program for agriculture as well, "so that we know that the people in the program are legally in the country."

Grassley followed up, though, stressing that any agricultural reforms for labor "should not include a mass amnesty of currently illegal immigrant farm workers." The senator again drew back to the 1986 immigration reform bill -- the last major immigration bill passed by Congress -- which legalized most undocumented immigrants who had arrived in the country before 1982. "We ought to learn from the mistakes of 1986," Grassley said., "Are we going to repeat them again?"

There are somewhere between 500,000 to 1 million agricultural workers in the country illegally. The number is difficult to pin down because the totals are unknown. Grassley recognized, "it's kind of a political complication," saying Democrats want to legalize everyone and Republicans don't believe these workers should be relieved of any responsibility for violating the law. "As a practical matter, I don't know how many millions of people would fall into that category of being agricultural, illegal people in the country," he said. "But you aren't going to hold them up and get them out of the country, I suppose the only answer is if you don't give them amnesty, they're still going to be in the dark."

Still, Grassley said there are not enough Republican votes to legalize those workers. The House passed the Farm Workforce Modernization Act in March that would give legal status to undocumented workers and allow H-2A guest workers to work year-round at farms such as dairies. That bill has the backing of more than 300 agricultural groups, but the U.S. Senate has been unable to come to its own compromise.

There are a lot of moving parts when it comes to Congress and agricultural labor. DTN reported Monday that Senate Democrats could look for a way to pass legalization for essential workers in a reconciliation bill, but there are questions over whether the Senate parliamentarian would allow an immigration measure in a budget reconciliation bill. https://www.dtnpf.com/…

Grassley raised that same point on Tuesday as well. "Reconciliation, I don't think, allows immigration, but if reconciliation does allow immigration, then it seems to me it wouldn't be much of a stretch to include the H-2A program in it," he said.

As DTN reported last week, a pair of House lawmakers got a provision added to a House appropriations bill that would allow H-2A guest workers to be recruited year-round in FY 2022, and open the program for various agricultural sectors such as dairies and greenhouses. The provision keeps H-2A as a temporary program, though. So a dairy or hog producer could bring in guest workers, but they would still have to keep the same restrictions on how long those workers could stay -- barring other changes in the program sometime down the line.

The Senate Judiciary Committee hearing is set for 9 a.m. Central and can be viewed here: 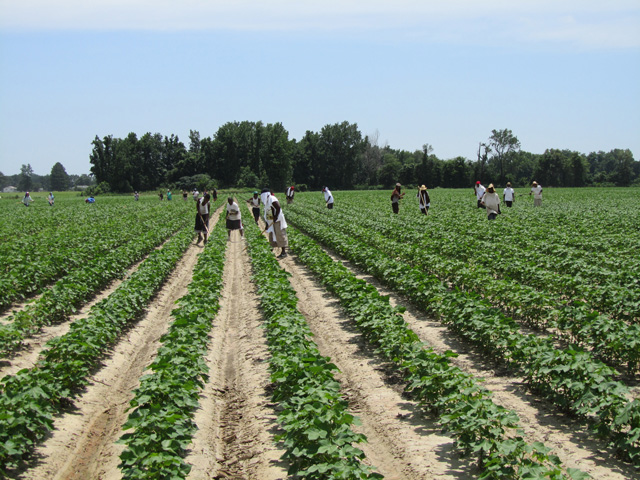