OMAHA (DTN) -- Responding to questions from the American Farm Bureau Federation, President Donald Trump's campaign points to the administration's support for farmers and agriculture in regulations, trade and labor, while former Vice President Joe Biden's campaign counters a Biden presidency would repair some of the trade relations that have affected agriculture the past 3-plus years.

For 40 years, AFBF has asked presidential candidates for responses to questions on major issues affecting farmers, ranchers and rural communities. The group on Wednesday released the unedited responses from the Biden and Trump campaigns. AFBF's presidential candidate questionnaire comes with 55 days until Election Day and growing focus on rural issues, especially in a handful of battleground states.

President Trump has talked extensively about agriculture throughout his administration, especially in relation to trade and regulatory relief. He also has spoken the past three years at AFBF's annual meeting. Trump was the first president to address the group's annual meeting since George H.W Bush in the early 1990s. Since the primaries, Democrats have worked to campaign more aggressively in rural America, recognizing that's one area where they lost the race four years ago.

"I've been hearing this from friends that worked very diligently on the Democrat side of the aisle," said Dale Moore, executive vice president of AFBF. "There seems to be, you know, in Mr. Biden's campaign, as well as Mr. Trump's, a lot of attention being paid to agriculture and rural America in general, not just the aggies."

The answers reflect the contrasting styles and policies of the Trump administration and Biden campaign. The Trump campaign's longest written answer to a question was about food-system resiliency and largely highlighted the administration's response to the pandemic. That included declaring agriculture as critical infrastructure and an executive order on meatpacking plants, as well as the $16 billion in direct aid to farmers under the Coronavirus Food Assistance Program.

"Thankfully, throughout this crisis, we never had a 'food supply' problem, we had a highly efficient, safe, and affordable ag and food value chain that was and remains the envy of the world," the Trump campaign wrote. "The strength of that value chain was bent in ways it never had before, but it never broke, and it has been the privilege of the Trump/Pence administration to leverage government resources and coordination capabilities to ensure our private sector was able to continue meeting the food needs of all Americans."

Biden's longest response came to a broad question about rural economic opportunity, broadband, health care and infrastructure. The Biden campaign stated, "A healthy, vibrant rural America is essential to the success of our country." The response spotlighted an infrastructure plan with $20 billion tied to rural broadband. On health care, the Biden campaign stated it would help stop the closure of rural hospitals across the country as well.

"The moral obligation of our time is rebuilding the middle class, so that this time everyone comes along regardless of their race, gender, sexual orientation, disability or zip code," the Biden campaign stated.

"It should not be dependent on whether they live in a city center, a small town, or a remote area. Everyone means everyone.

The Biden campaign stated they support legislation that would provide legal status to farm workers based on prior agricultural work history, "and a faster track to a green card and ultimately citizenship." Biden's campaign highlighted the need to ensure farm workers are protected with labor and safety rules, overtime pay, humane living conditions and protection from pesticide and heat exposure.

The Trump campaign on farm labor stated the administration has worked to streamline the H-2A agricultural guest-worker program and worked through the State Department to ensure farmers continued to receive temporary farmworkers under H-2A during the pandemic. The Trump campaign also criticized Biden's proposals.

"A Biden administration is simply interested in giving amnesty to all the people here illegally right now, they will not reform our currently outdated legal immigration system to ensure we have the kind of labor we need to meet the needs of our farmers, ranchers and other employers who need seasonal labor," the Trump campaign stated.

Biden's campaign stated a Biden administration would work with Congress to eliminate incentives that reward companies for sending production offshore, as well as increasing the corporate tax rate to 28%, "rolling back the Republicans massive $1.4 trillion giveaway to corporations and putting small businesses on equal footing with large corporations." The Trump campaign pointed to "one of the most important achievements" of his first term, which were tax cuts passed in 2017. "Both corporate and individual rates were reduced, capital gains taxes were significantly reduced, and the death tax burden, which directly hits our family farmers across the U.S., were significantly reduced by raising the exemption level and addressing the stepped-up basis."

The Trump campaign stated that any sustainability or climate requirements must be science based "and not result in tighter profit margins for farmers." The Trump administration supports the voluntary conservation programs in the farm bill. The Trump campaign added, "A Biden administration will be controlled by environmental activists that would be working from Day 1 to implement the New Green Deal which would have devastating impacts on farmers and ranchers.

"The Trump/Pence administration launched the Ag Innovation Agenda earlier this year with the goal of telling the story of agriculture's contribution to the economy and the environment, starting to set the benchmarks for how the sector can be a part of solutions, not demonized as the problem."

Trump's campaign also stated, "Combining ag biotechnology with increased data will be the basis of the next 'Green Revolution' in agriculture. Contrast that with a Biden administration that will side with environmental activists to reduce access to key chemicals, biotech seeds and other types of technology that are critical to the future success of our nations farmers and ranchers."

The Biden campaign stated "climate change poses an existential threat to all of us -- including farmers." Combatting climate change can create new opportunities and sources of revenue for farmers. The Biden administration would work so U.S. agriculture is the first in the world to achieve net-zero emissions and farmers would earn money working to meet that milestone. Biden wants to "dramatically expand and fortify" the Conservation Stewardship Program "to support farm income through payments based on farmers' practices to protect the environment, including carbon sequestration -- for example, through cover crops."

The Biden campaign states its administration would invest in research to focus on practices that build soil carbon "which maximize farm and ranch productivity. Soil is the next frontier for storing carbon."

DTN/The Progressive Farmer's Agriculture Confidence Index survey, conducted Aug. 6-14, asked farmers about their support for President Trump. At the time, 71% said they would likely vote to keep the Trump administration. The level of support for the president was lower than the 89% of farmers who said they would vote that way in the April 2020 DTN survey.

Other polls in rural areas show Trump's support among rural men remains stable, but some polls show his support has slipped among rural women, said Chris Gibbs, an Ohio farmer and president of Rural America 2020, which has criticized the Trump administration mainly on trade policies.

"There's no doubt the president has courted agriculture and courted farmers," Gibbs said. "He's used a lot of subjective descriptors like 'ripped off' and 'unfair' and 'disaster' to make farmers feel like they have been taken advantage of, and they've responded to that. The difficulty is he's gotten farmers in a trap, a financial trap."

The Trump administration has made it a focus to support agriculture financially and by cutting back on regulations. A major policy shift pushed by farmers included EPA rewriting Clean Water Act rules that defined regulatory waters of the U.S. That came after criticism across agriculture against a waters of the U.S. rule written when Biden was vice president under former President Barack Obama.

"The farmers perceive that as a land taking -- again, right or wrong -- but perception is real," Gibbs said. "I would encourage the Biden campaign to make it safe for farmers to take a hard look at it, safe from an environmental standpoint, and make sure the Biden administration that they are looking to partner with farmers and not villainize farmers." 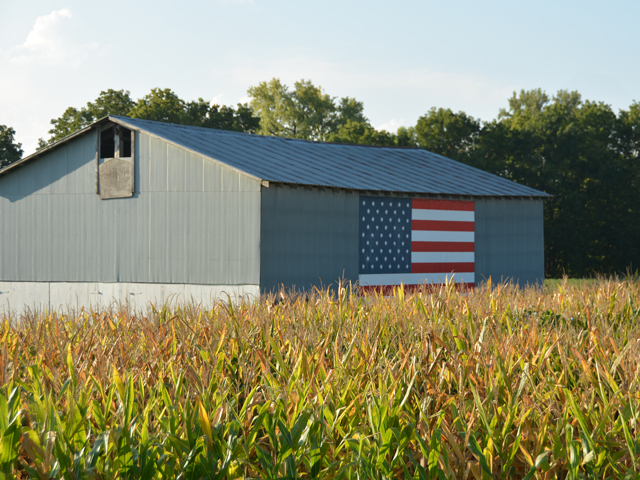