As the coronavirus pandemic has continued on, we've finally begun to learn just how important those tens of thousands of packing plant workers are around the country, and just what kind of risks they face to ensure there is meat in the retail cases in this chaotic moment in history.

Through this weekend, packing plant workers account for at least 1,300 reported cases just in Colorado, Iowa, Nebraska and South Dakota. The numbers move significantly higher when poultry plants in the Southeast are factored in as well.

Initially, the story about COVID-19 and livestock was about markets. Before workers started becoming infected, livestock prices were quickly falling. Then the coronavirus cases began showing up and packers started offering worker incentives to show up, and finally started to look at social distancing, testing worker temperatures and providing personal protection equipment. Unions had demanded action much earlier, but it wasn't until cases began to dramatically spike that packers began to curtail shifts and temporarily close plants.

Last week, Smithfield Foods in Sioux Falls, S.D., became "the hotspot" nationally for COVID-19 cases. As of Sunday, the Sioux Falls Argus Leader reported 725 workers had tested positive, and another 143 related cases. At least one worker, Augustin Rodriguez, 64, had died.

The JBS SA beef plant in Greeley, Colo., has four reported fatalities and more than 100 positive cases among its workers, and it has temporarily closed. Cargill in Fort Morgan, Colo., reported a worker fatality last week and at least 18 other worker infected as well.

The Greeley Tribune over the weekend recognized the courage of JBS employees in Greeley who came forward and raised concerns about the risks those workers were facing at the packing plant there.

"Consider the kind of people who put themselves in danger of reprisal by stamping their names on their reports to the newspaper and others of insufficient communication and protection inside the plant, which, in just a couple weeks, brought the plant from a '100% confidence' level, in the words of the company’s CEO, to this never-before-seen temporary closure," the Greeley Tribune wrote. https://www.greeleytribune.com/…

Over the weekend, United Food and Commercial Workers Union (UFCW) along with JBS, announced a $4 an-hour wage increase for workers at JBS plants, along with new safety measures for workers.

“We hope JBS’s leadership sends a message to all other companies - union and non-union. Now, more than ever, it is critical that not only is our food supply protected, but that food processing and meatpacking workers are protected as they perform such an essential role during this health crisis," said Marc Perrone, UFCW's international president.

Nationally, at least six Tyson Foods workers have lost their lives to the virus. Four died in Georgia earlier this month -- Three have been named: Elose Willis, Mary Holt and Annie Grant, according to the Southeast Council of the Retail, Wholesale and Department Store Union. Two other workers have died in Iowa, but they have not been named.

Tyson has shut down a pork plant in Columbus Junction, Iowa, where the two fatalities occurred and at least 110 employees tested positive. But an outbreak has hit a Tyson pork plant in Waterloo, Iowa, as well. As of Friday, the Waterloo plant remains open, but local officials are calling for the plant to shutdown as cases in the county spiked the past few days. Iowa's governor said Friday the state was testing every worker at the two Tyson plants is one of the major testing undertakings in the state.

On Sunday, Iowa had its single-largest day for reported COVID cases at 389 positives. State officials said 261 of the cases were tied to packing plants. The Des Moines Register reported 84 cases came from Tyson employees and 177 came from National Beef in Tama County, Iowa. https://www.desmoinesregister.com/…

The Omaha World-Herald points out the largest number of cases in Nebraska is in Hall County -- Grand Island -- where JBS operates a major plant, and there are other food companies in the area. Hall County has roughly 10% of the population of Omaha but has 177 more cases reported. West of Grand Island, Dawson County, Neb., home of a Tyson plant in Lexington, saw a spike in cases crop up over the weekend as well.

The situation with packing plants likely isn't going away quickly. And these are just the areas where there has been more reporting. Some counties in western Kansas, including Ford and Finney, are seeing higher case numbers, and they also are home to large processing plants. 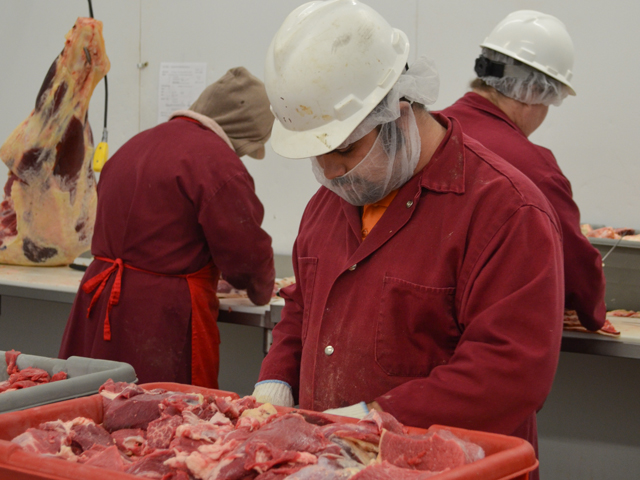