My first experience reporting on a concentrated animal feeding operation (CAFO) expansion in a rural community was more than 25 years ago in Illinois as a business reporter for a small daily paper. I reported on the same type of meetings as a county government reporter in Missouri and later as a regional reporter in Iowa and Nebraska.

These meetings all pretty much go the same way. Local residents, some of whose families have lived in a home or farm for generations, learn someone -- a neighbor, an outsider or a corporation -- is building several confinement buildings near them, and there is little that can be done locally to prevent it. The person putting in the facility always maintains it will be good for the area economically and won't really be a problem environmentally. Early on, local zoning rules could block CAFOs, but over time that authority was taken away by state legislatures, and the CAFO often ends up being built in the end.

These are always emotional battles, but if you don't personally live in the area affected, it's often not a big deal. That's why few people pay much attention to CAFOs until one is being built in their backyard.

St. John Lutheran Church in Mineola, Iowa, on Monday night held a community meeting about plans for an eight-building broiler operation that would raise 200,000 chickens roughly every eight weeks. The facility would raise birds for Tecumseh Poultry and its "Smart Chicken" plant, which is about an hour away, near Lincoln, Neb.

The poultry operation would be roughly a two-mile drive north of Mineola, but fall just within another county.

The meeting was called after social media exploded roughly five days earlier when most residents first learned about the poultry operation in a newspaper article about a county board meeting debate over the facility. The plans caught a lot of people off-guard. A Facebook page cropped up and everybody had their own opinion about it. Many of the opponents see themselves as farmers as well.

I actually live in Glenwood, Iowa, about eight miles away, but I attend church at St. John in Mineola. (As I often say, my wife is Lutheran, which pretty much made me a Lutheran, too.) I'm still new to St. John, having only been attending for just two decades. Looking around Monday night, the only times I've seen the church that packed with people was Christmas, Easter and an annual German heritage dinner, which happens to be coming up on Feb. 15 if you like sausage and sauerkraut.

Mineola might have a handful of businesses, but outside of St. John's Lutheran Church, the town centers around a local restaurant, Toby Jack's, and the Wabash Trace Nature Trail. The trail runs 63 miles from Council Bluffs, Iowa, to the Missouri border. Mineola, though, is only about a 10-mile ride from the trailhead in Council Bluffs. So Toby Jack's is a destination point for trail riders, so much so that, weather permitting, every week there is a Thursday night "taco ride" from the trailhead to the restaurant. The Thursday night ride is so popular in the spring and summer that the schools near the trailhead have to try to keep people from filling up the parking lot during school events.

The poultry barns will basically come right up to the trail. There's a fear the odor will drive away the tourism that the trail has built up over the past three decades.

Iowa uses a "master matrix" scoring plan to determine if a site works for a CAFO. Local zoning laws cannot restrict agricultural operations, but last week the Pottawattamie County Board of Supervisors voted 4-0 to recommend denial of the poultry barns to the Iowa Department of Natural Resources even though the poultry barns scored above the minimum on the master matrix. The county's zoning plan calls for further home developments in the area as water lines are extended. A poultry operation would change all of that.

The landowner selling the property, a local businessman named Cory Leick, told residents during the meeting he was initially approached about selling the ground for the CAFO last spring. That led to a lot of groans in the audience.

Iowa DNR and the Iowa Department of Agriculture in Des Moines will decide whether to approve the facility or deny it. An appeal eventually could go to the state's Environmental Protection Commission as well.

Dean Jennings, an attorney in Council Bluffs, Iowa, told residents it could cost as much as $100,000 to combat the poultry operation, ideally just to get the facility moved elsewhere. "To simply put your head in the sand and somehow think it's going to go away is just not realistic," Jennings said.

Also among the first issues raised was odor. Some residents have respiratory problems while at least one woman runs a small dog obedience school nearby. They each see their livelihoods and quality of life threatened. Property values could decline.

Iowa has no rules that address odor. As of 2016, only seven states require CAFOs to submit some type of odor management or abatement plan, according to the Centers for Disease Control.

Others raised concerns about groundwater contamination, and the impact on a nearby stream, Keg Creek. I thought Keg Creek should qualify as an intermittent stream so it should fall under the protection of EPA's new "Navigable Waters Protection Rule," but that's likely an unrealistic assumption.

The gravel roads in the area are bad -- bad enough the school buses rerouted to avoid them. There were complaints about the semi-truck traffic that could go down those roads

Finally, the person looking to build the poultry barns stepped to the microphone. Mike Clifton is an electrician looking to get into the poultry business with his brother-in-law. He acknowledged, "Nobody wants a chicken barn next to them, but they are going up." Clifton doesn't have any background operating a barn, but said another poultry farmer in the county would advise him, as well as the Smart Chicken people. The poultry litter would be stored inside, he said, until it is ready to be spread onto area farm ground for fertilizer, per his nutrient management plan.

Clifton said he would not be hiring any employees and the technology is good enough these days that people run poultry barns using a smart phone. Mortality rates would be minimal so he didn't see any problems disposing of dead poultry, or stockpiling manure. Questions were posed about the potential air and water problems, and Clifton pushed back. "I'm not telling any of you guys how to run your business."

Neither Leick nor Clifton anticipated the response. As the meeting wore on, residents were pushing Leick not to sell the property, even if the plans were approved.

Nothing was settled Monday night, but people were educated about what can happen in their backyards. It will take about a month for DNR to decide whether to permit the operation.

I realized, again, that it's difficult to quietly sit and try to remain a disinterested party as some people I know let their objections be known. It's just different when it is your backyard. 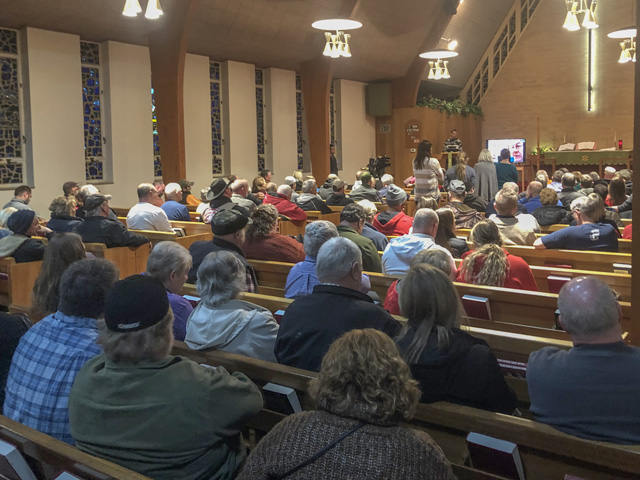 Richard Oswald
1/28/2020 | 3:47 PM CST
No jobs. Building materials will come from the city. Costco will supply the feed. The only thing to make it better is if the county would grant the owner a tax incentives package so his neighbors who don't want it and won't profit from it could help pay for it.