Agriculture Secretary Sonny Perdue defended his department's statistical agency at the American Farm Bureau Federation annual meeting in Austin, Texas, on Monday, but said USDA would be open to hearing any ideas from farmers or others about ways to make USDA crop reports more accurate.

Saying he heard from Farm Bureau leaders on several key topics in 2019, Perdue noted in his speech to Farm Bureau members that farmers raised concerns throughout the year about the crop reporting at the National Agricultural Statistics Service survey.

"We got kind of paranoia in light of all the prevented planting and other kind of things that were falling on us," Perdue said. "We got a little conspiratorial thinking NASS was out to get us too."

The August production report was another one that shocked the market with an average projected corn yield of 169.5 bushels an acre, a 3.5 bushel an acre bump from earlier forecasts.

It was a question and challenge from a farmer in August during an event in Minnesota about those acreage and crop production numbers that caused Perdue to take some criticism. The secretary defended NASS data then, but joked that that two farmers in a basement is called a "whine cellar." The joke caused a few groans in the audience, but led to more criticism after the comment was picked up by national media.

USDA has since dialed down the projections some. Planted corn acres for 2019-20 in the January report were 89.7 million acres with harvested acres lowered slightly to 81.5 million. But USDA, which had earlier lowered yield to 167 bpa, bumped it back up to 168 bpa in January.

At Farm Bureau on Monday, the secretary said he questioned staff and NASS staff were at the AFBF meeting to answer questions about the methodology on how USDA collects that information. But Perdue expressed confidence about the acreage and production data that came out over the summer.

"If you have got an idea how we can use electronics and maybe an app for better surveys, we would like to hear those," Perdue said. "We are open to those kind of ideas of using modern technology to get you the best data you can to make plans for your farms." 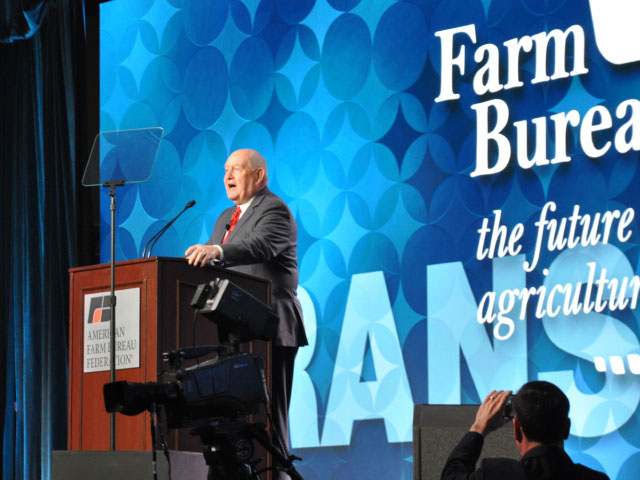