Living in Iowa, all the mail, TV ads, phone calls and texts are from Democratic presidential candidates. Tom Steyer alone is spending more money on TV ads for someone polling around 2% than can be fathomed by a non-billionaire.

The Iowa caucuses are Feb. 3 and can't seem to come fast enough. Sometime before the end of March, a Democratic presidential nominee will break from the pack.

With turmoil in Iran -- now -- and the never-ending drama of this White House, it's easy for someone in a blue political bubble to see President Donald Trump as a vulnerable incumbent. A political numbers website, FiveThirtyEight.com, cited this week that "Trump is the most unpopular president since Ford to run for reelection." Trump's job approval rating is about 42% and disapproval is about 53% right now. That's been a typical baseline for Trump. The website noted only Gerald Ford at 39.3% was lower. https://fivethirtyeight.com/…

But it's only January, and a lot can change over the next eleven months. Ford, Reagan, Clinton and Obama all raised their approval ratings by Election Day and, and all but Ford won the following election.

Trump will be the first president ever to face re-election after an impeachment vote, but the significance of that should really be discounted because of the partisan divide that already exists in the country.

In looking at what will happen next November, it still comes back to James Carville's infamous 1992 line to Bill Clinton, "It's the economy, stupid." Then there is Reagan's 1980 question, "Are you better off now than you were four years ago?"

Just taking employment into account, 23 states hit historically low unemployment rates at some point in 2019. While December's jobs report comes out on Friday, the unemployment rate in November was 3.5% and has trended downward over the past two-plus years. https://www.bls.gov/…

As for wages, the Wall Street Journal cited in late December that income for the bottom 25% of workers rose 4.5% throughout 2019, and overall wages for everyone rose 3.7%. Most people are making a little more money right now.

In another indicator of how the economy is doing for "Joe Six Pack," gas prices peaked in 2012 at a national average of $3.62 a gallon. Right now, AAA shows the average gas price nationally at just under $2.60 a gallon. The average price remains relatively lower throughout most of the South and Midwest in states Trump carried in 2016. Gas prices had remained relatively steady throughout Trump's term with prices at an average of $2.23 a gallon when he was elected.

It's been different in agriculture, and even some of President Trump's most ardent defenders, such as Sen. Charles Grassley, R-Iowa, can rail on the Trump administration's handling of biofuel demand. EPA has incensed biofuel supporters, including corn and soybean farmers, with the way it has handled refinery waivers and annual blend obligations. That's not going to stop, but likely will actually get worse as 2023 approaches.

Trade policy also has been rife with tariffs and import bans, but $28 billion in direct payments to farmers over the past two years can mollify most farmer critics, and their favorite commodity organizations. There have been no tractor runs to Washington to vent about farm prices.

Still, January 2020 is clearly a month of trade victories for agriculture and Trump's rural base. As January hit, Japan lowered tariffs on U.S. agricultural products, and they will keep ticking downward to reach equivalency with Japan's trading partners in the Trans-Pacific Partnership (TPP). If it goes off as scheduled, Trump and Chinese officials will sign their phase-one trade deal on Jan. 15 in Washington, D.C., with the president and his team maintaining China will buy $40 billion in agricultural products annually. It's easy to imagine President Trump will hit that message on Twitter like a sledgehammer crushing a soybean. In Congress, the president is just a few long-winded Senate floor speeches away from what will likely be a strong bi-partisan vote to adopt the U.S. Mexico Canada Agreement. USMCA is projected to raise U.S. agricultural exports roughly $2.2 billion, or about 1.6%, but if you took a drink every time someone mentioned farmers and "certainty," you'd be pickled by now.

So effectively after three years of turbulent trade disputes, the president and his team are notching wins for farmers and livestock producers at just the right time.

None of this means the sky and stock market can't fall hard between now and November. In 2008, unemployment rose 2.8% and the stock market crashed as Wall Street once again screwed up the country and put millions of people out of both jobs and homes.

Right now, though, it's hard to see that President Trump is starting his re-election campaign on the negative side of the ledger. 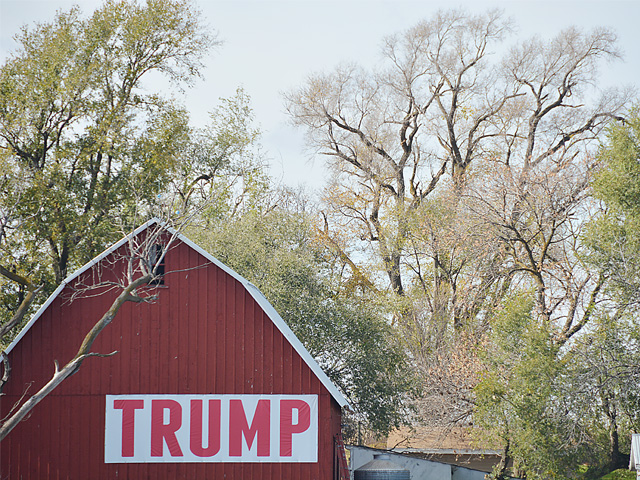