At a corner of the U.S. Capitol that is a popular spot for press conferences and rallies, a small group of roughly ten or so speakers on Wednesday announced the formation of coalition "U.S. Farmers & Ranchers for a Green New Deal."

Highlighting that climate change is affecting farmers and ranchers, speakers on Wednesday focused on local foods, overhauling the commodity farm programs and paying farmers for "regenerative" practices and land stewardship.

Among the members of Congress who spoke were Reps. Chellie Pingree of Maine, Jim McGovern of Massachusetts, Debra Haaland of New Mexico, and Earl Blumenauer and Peter DeFazio of Oregon, all Democrats.

"We're not going to solve the climate crisis without changing agriculture," Blumenauer said, adding "We pay too much to the wrong people to grow the wrong food."

Providing a backdrop of Capitol Hill symbolism, as members of Congress spoke about changing agriculture there were capitol police motorcycles, riding lawnmowers, construction equipment and massive black SUVs all operating on gasoline engines frequently passing by and in some cases the engine noise drowned out the speeches. Yet, lawmakers continued to talk about how people outside of Washington, D.C., need to change how they operate, though fossil fuel use was barely mentioned during the press conference.

Also notably absent from Wednesday's event were mainline agricultural groups with staff and leadership in Washington. Even groups that have advocated Congress take action on climate change, such as National Farmers Union and the National Sustainable Agriculture Coalition, were not part of the rollout of this new coalition.

That might reflect that the coalition wasn't quite ready for a full-scale rollout, but the groups involved wanted to time their event with a global climate change "strike" on Friday as well as a United Nations climate summit next week.

The groups represented Wednesday, including the Women, Food and Agriculture Network and the American Grassfed Association stated their coalition represents more than 10,000 farmers and ranchers nationally. They submitted a letter to Congress calling for "food and agricultural policies that support climate-friendly organic and regenerative farming, ranching and land-use practices."

Sherri Dugger, executive director of the Women Food and Ag Network, also spoke at the event about the need to help producers mitigate climate risk and also provide producers with an opportunity to generate more income by sequestering carbon.

The Green New Deal has drawn scorn from at least some farmers and ranchers, especially over early comments made by its early driving force, freshman Rep. Alexandria Ocasio-Cortez, D-N.Y., who initially indicated her plan would force farmers to change and target beef production over cattle emissions. Ocasio-Cortez, known as "AOC" has since backed off some of those statements.

When DTN posted a photo of the press conference on Twitter asking if people were on board with the farmers and ranchers for a Green New Deal, the Democratic chairwoman of Nebraska, Jane Kleeb replied, "As long as folks in the broader coalition stop demonizing farmers and ranchers, sure! Some are great--others still to this day tell family farmers they are the problem, they focus on meat when the focus should be on Big Oil."

There are ranchers who support the Green New Deal and see an opportunity in paying farmers to sequester carbon. Among the speakers Wednesday was Will Harris, a fourth generation farmer and ranger from Bluffton, Ga., whose farm, White Oak Pastures is "a multi-species, multi-generation, vertically integrated farm" and the largest private employer in his county with 165 employees.

"I like to think that people who know about our farms think of us and our leadership in enriching rural America, regenerated land management and mitigating climate change," Harris said.

On the Green New Deal, Harris said, "I think most people, certainly I think, is the work product of a group of freshmen known as congressman AOC and the Squad," Harris said.

"I am certainly not part of that group," Harris said. "I am too old, too white, too rural, too agrarian and too Southern. And I think this is where is really gets interesting because the Green New Deal is a point where AOC and the Squad, and Will Harris and White Oak Pastures can find some common ground."

Harris said he hoped members of Congress could reach across the aisle and produce legislation that would enrich rural America, improve land management and address climate change.

Harris later told DTN his operation has 1,000 cow-calf pairs that are pasture raised while the farm also has hogs, sheep, goats, rabbits, chickens, ducks, geese and eggs, as well as a vegetable operation. White Oak also has its own USDA-inspected processing operation for red meat and poultry.

"I was a very conventional cattleman for many years ... had a feedlot and raised cattle conventionally for 20 years. When I started changing the way I farm, it had nothing to do with climate change. It had a lot to do with other things. The part of my farm that impacts climate, and I think science shows this, is the way we graze our land. And I didn't do this to bring down greenhouse gases. I probably didn't know what that was. I did it because I wanted the land to be better."

Harris said he wanted more organic life in his soil, which prompted him to convert to a more pasture-based grazing system for his cattle. "I think most people who raise animals for a living are remiss if they don't consider the kind of impact prescriptive grazing and holistic management can have on the operation."

The letter from Regeneration International to Congress https://us.netdonor.net/… 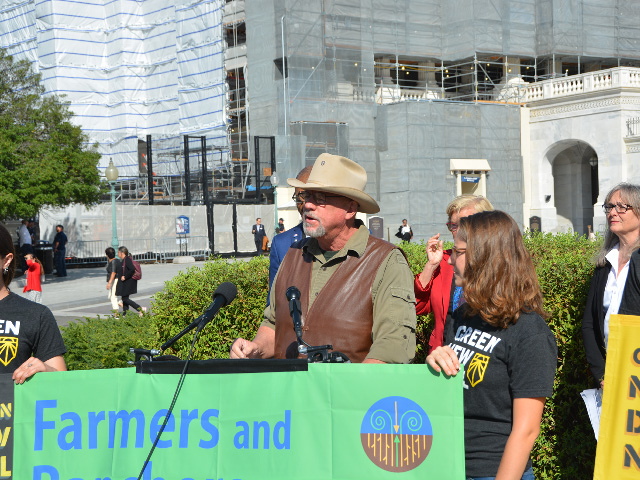