Agriculture has challenges when it comes to reducing greenhouse gas emissions, but the impacts of climate change on food production, the land and water will likely worsen food security in the future.

If countries don't like seeing migrants trying to get across their borders, they are really going to hate it as climate change in the future increases food insecurity.

Migration due to food insecurity was one of the major risks highlighted in a "Climate Change and Land" report released earlier this week by the United Nations Intergovernmental Panel on Climate Change (IPCC). The actual title of the report is "IPCC Special Report on Climate Change, Desertification, Land Degradation, Sustainable Land Management, Food Security, and Greenhouse gas fluxes in Terrestrial Ecosystems."

That's a lot to unpack.

The report raises multiple questions about the tradeoffs of reducing greenhouse emissions from agriculture, and what the impacts could be --- both positive and negative.

“It really calls on us to think across the entire food production chain,” said Debra Roberts, co-chair of the IPCC’s Working Group II, during a press conference announcing the report’s findings. “There’s no single silver bullet. It means we’re going to have to tackle complex issues and complex needs.” https://www.vox.com/…

Climate change will increase the frequency and magnitude of extreme weather events, including drought.

Cynthia Rosenzweig, a researcher at the NASA Goddard Institute for Space Studies, and a lead author on the report, said at the news conference that a danger globally is that food crises would hit more than one continent at the same time. "The potential risk of multi-breadbasket failure is increasing," Rosenzweig said. "All of these things are happening at the same time."

Scientists have a high level of confidence that the food supply will become more unstable as carbon dioxide continues to rise. Nutritional quality of crops will decline and higher food prices will lead to greater risks for food insecurity and hunger.

As the Washington Post noted, if climate change is left unchecked, it "could imperil food security in parts of the world, putting further strain on a food system that's already stressed." Crop yields could shrink and foods such as wheat become less nutritious. https://www.washingtonpost.com/…

Pieces of the report citing the potential of less nutritious food also validate a recent study that prompted a USDA researcher to resign. As POLITICO first reported, Lewis Ziska, a physiologist at USDA' Agricultural Research Service, was part of a study that found rice is losing nutrients such as protein and minerals, because of rising levels of carbon dioxide -- the same kind of finding cited by the IPCC report. USDA had tried to downplay the report even though the work was a broad collaboration between multiple federal departments and researchers at several universities, including in Australia, China and Japan. Ziska resigned earlier this month over the way USDA handled the research findings. https://www.politico.com/…

Yet, the report also challenges the emissions from agriculture, water use, land conversions, soil degradation, biofuel production and animal agriculture. The report maintains that agriculture can go from being part of the problem to part of the solutions over emissions.

Globally, agriculture accounted for about 23% of emissions from humans from 2007 to 2016, the report cited. Still, both agricultural production and food demand have both increased over time as well.

In the U.S., EPA puts agriculture emissions at about 9% while transportation, electricity, industry and commercial and residential emissions were all higher. https://www.epa.gov/…

Reducing food waste would go a long way to solve some of the problems. Food waste and losses amount to as much as 10% of greenhouse gas emissions, and as much as 25% to 30% of food is lost or wasted. Food packaging, on-farm storage, transportation options all can reduce food waste. "Causes of food loss and waste differ substantially between developed and developing countries, as well as between regions," the report cited.

Urban expansion will take away cropland, leading to losses in food production. That puts greater risks on the food system. American Farmland trust highlighted this issue in May 2018 report, point out that in the U.S. alone, nearly 31 million acres of agricultural land was converted to urban use from 1992 to 2012, effectively taking out as many acres as farmed in the state of Iowa. https://www.farmlandinfo.org/…

Climate scientist Michael Mann noted on Twitter that burning fossil fuels is still the biggest adjustment needed to address global warming. "The bulk of the problem remains our burning of fossil fuels for energy & transport, but this [ag/food production] is a significant piece of the pie, and we need to focus on it. There is ample opportunity to reduce those emissions in a very win-win sense"

Frank Mitloehner, an expert on animal science and air quality at the University of California-Davis, tweeted that many media outlets were using the report to call for vegetarianism or veganism, but that's not what the report stated.

The report actually cited that animal-sourced food produced in resilient, sustainable & low-GHG emission systems present major opportunities for adaptation & mitigation while generating significant co-benefits in terms of human health. The report added that reducing meat consumption may also lower iron and zinc nutritional quality for some vulnerable groups of people. The report cited that in Europe, more than one-fifth of preschoolers and 25% of pregnant women have anemia.

The writers of the report, though, highlight tradeoffs when it comes to animal agriculture, crop production and growing more forests. For instance, the report cites the need to reduce grassland conversion to crops and restore both peatland and wetlands to sequester carbon. Expansion of cropland globally also would result in larger declines of biodiversity as well.

At the same time, growing new forests would take large amounts of carbon dioxide out of the atmosphere. Doing that, though, takes away cropland and potentially raises the cost of food.

Biofuels are another area of mixed message. After all, the push is to get off fossil fuels. Land area for bioenergy is questioned because of the impacts on water scarcity, biodiversity, land degradation and food security.

Some friends of mine at Solutions from the Land were concerned about how the report portrays biofuels and renewable energy. They cited the importance of technology to focus on carbon sequestration, renewable natural gas and developing other feedstocks for low-emission fuels.

"Farmers need to be able to focus on their capacity to feed the world. Society needs to focus on the will to feed everyone," said California farmer and SfL Co-Chair AG Kawamura. "Shifting from food to feed to fuel will let us utilize what might otherwise be 'waste' when production efforts fall short. Our diversity is the toolkit that maintains the capacity needed to meet our production and sustainability goals."

A summary of the IPCC report can be found here: https://www.ipcc.ch/… 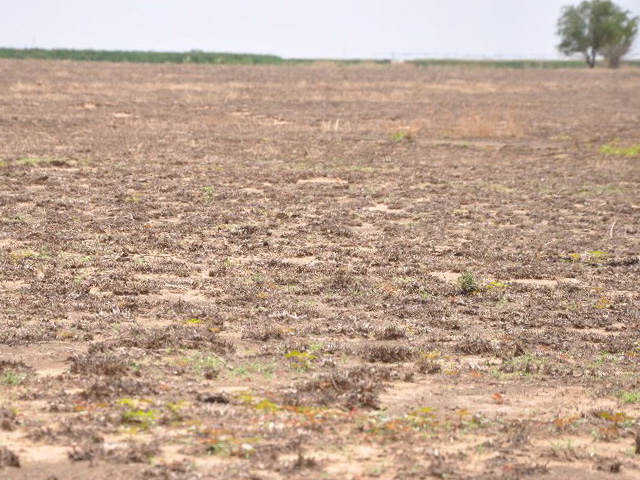