It's been an 11-year, $30 million regulatory journey for genetically modified salmon to end up on American plates, and it will take about another 18 months for that to happen.

Earlier this year, the Food and Drug Administration lifted an import alert that allowed Massachusetts-based AquaBounty Technologies to import roughly 150,000 eggs into Indiana from its facility in Prince Edward Island, Canada. The eggs arrived at an Indiana fish farm in late May and it will take about 18 months for the salmon to reach market weight between roughly eight to 10 pounds.

The whole crux of the AquaBounty salmon involves adding a growth hormone gene out of Chinook salmon that doubled the size of a traditional Atlantic salmon over the same period, as well as adding DNA from ocean pout, an eel-like fish. But the salmon mark a regulatory advance because the fish is the first genetically-modified animal allowed by FDA to be raised and sold commercially in the U.S.

FDA had approved AquaBounty back in April 2018 to raise salmon at the Albany, Ind., operation, but the import alert also had to be lifted to begin bringing in the eggs from Canada. It took 11 years to get U.S. regulatory approval, partially because FDA did not have any process for approving a genetically-engineered animal. AquaBounty actually first approached FDA about the fish as far back as 1993. The pathway to getting regulatory approval was for FDA to treat the fish eggs as if the agency were approving a new drug.

UPDATE: (A company spokesman emailed DTN on Friday stating the regulatory effort should be highlighted as starting in 1995 and costing AquaBounty $120 million.)

Within 18 months, AquaBounty's product, AquaAdvantage Salmon, will go on sale out of Indiana as well as its Prince Edward Island operation, which is projected to start harvesting fish in the summer orfallof 2020. Production overall will remain relative small with the Indiana facility capable of producing about 1,200 metric tons of fish at one time.

Sylvia Wulf, president and CEO of AquaBounty, said in an interview this week at the BIO World Congress that the company is finally beginning to have more detailed conversations with customers and putting in a supply chain for its fish. Marketing has largely taken a back seat until now because of the prolonged regulatory situation.

"It's been a bit of a challenge to have any kind of meaningful conversation with a customer because we couldn't tell them when the product would be there, they couldn't inspect a facility with fish in it, so now we believe we can accelerate that commercialization," Wulf said.

The battle over GMOs in the U.S. with "a well-funded anti-GMO lobby that's created a lot of distrust at the consumer level so we face a different labeling requirement and expectation in the U.S.," Wulf said. "But the product is the same. It's identical to Atlantic salmon, and it's safe for people to eat, it's safe for the fish and it's safe for the environment. Those are the three things the FDA was rigorous in terms of determination before we got the approval."

AquaBounty is faced with selling its salmon following years of derogatory language around the fish, which Wulf said is not scientifically correct and not fair to consumers. "Because what they have done is placed a false perception in the consumers mind," she said.

In the U.S., AquaBounty doesn't have to put a bioengineered logo with its salmon because of the size of the company. But Wulf said AquaBounty will use the USDA symbol under the National Bioengineered Disclosure Act.

"We'll carry the marketing symbol that USDA has developed as part of the act," Wulf said. "We think that makes sense because we believe in transparency."

The symbol is only necessary for retail sales, and not sales to restaurants or institutions. Wulf said the company plans to work with its customers to provide more transparency, which might also include a Quick Read (QR) code or toll-free number to provide more information about the fish.

"We want them to be curious about the food because this is identical to Atlantic salmon," Wulf said. "With what has happened with GMOs, consumers don’t understand and they think this is a food safety issue."

Contrasting the regulatory process in the U.S. and Canada, Health Canada made the decision early on, doing the same kind of allergy, toxicology and other testing to conclude the AquaBounty salmon to be identical to Atlantic salmon. Because there is no food safety concern, Canadian officials saw no reason to label the fish.

"I consider Canada to be a bit more progressive than the U.S.," Wulf said.

Wulf notes AquaBounty's first genetic modification with its salmon actually began 30 years ago with the Chinook growth gene. Since then, the company has been using traditional breeding practices and is on its 14th generation of genetically-engineered salmon.

With a company built around salmon geneticists, Wulf said AquaBounty will look at the emerging technology of gene editing as another tool for health and productivity of salmon, "as well as other species," she said. 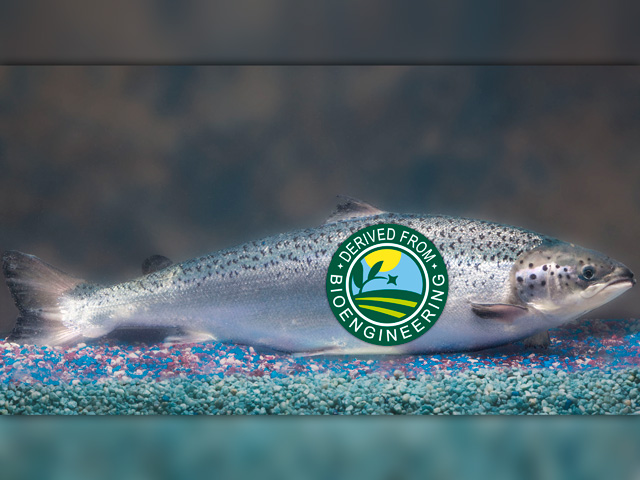