STORM LAKE, Iowa, (DTN) -- Several farm groups focusing on issues related to small family farms in crisis held a rally here Saturday leading up to a rural issues forum later in the afternoon with a handful of Democratic presidential candidates.

NOTE: I plan to update this blog with comments from the forum later in the day as well as post tweets at @ChrisClaytonDTN

Among the speakers was Sarah Lloyd, a member of Wisconsin Farmers Union and a dairy farmer who milks about 350 cows with her husband and family near the Wisconsin Dells. Lloyd said something needs to change in the dairy industry for smaller dairies to survive. Her family might not be farming by the end of the year, Lloyd said.

"We're struggling mightily," she said. "We're probably losing $20,000 a month and it's not because we're not lean and scrimping and saving. Our input prices continue to go up and we can't seem to get a good price in the market."

Wisconsin Farmers Union brought more than 30 people to Iowa to talk about fair markets and grab the attention of Democratic presidential candidates at the forum held at Buena Vista University. "It's not that we're failing business people because we have to tighten our belts," Lloyd said. "We have got to come together and demand fair access to the marketplace. This is a great opportunity for us to show what the people need."

Lloyd said farmers need fairer prices for their products, better antitrust enforcement and country-of-origin labeling so consumers can choose U.S. products. "We are not the problem," she said. "The consolidated market is the problem."

Also part of the Wisconsin delegation was Patty Edelburg, vice president of the National Farmers Union. Edelburg said groups such as Wisconsin Farmers Union recognize they need to put faces to the farmers who are suffering from an extensive period of low prices. Wisconsin is putting a major emphasis on dairy reform after seeing more than 700 dairies close last year alone. Wisconsin has a "Pull Together" campaign to change milk pricing.

"We're trying to get more awareness that we need change and the current dairy programs aren't working for them, especially family-sized farms," said Edelburg, who operates a 120-cow dairy with her husband.

Edelburg said the new Dairy Margin Coverage program is going to make it easier for farmers to enroll and buy-up coverage than the MPP in the last farm bill. Some groups are calling for Congress to consider a form of supply management rather than continuing to maintain exports will rally markets for producers. "The new program is still not going to do anything for supply," Edelburg said. "For 25 years we have been pushing for exports to raise prices and it hasn't done anything in 25 years. It's time for something to change."

A bipartisan group of senators and congressmen wrote USDA officials this week urging them to get enrollment going on the Dairy Margin Coverage program.

Sen. Elizabeth Warren, D-Mass., also fired up the crowd at the farmers rally. She started off talking about the flooding in Nebraska and Iowa, saying Americans "stand shoulder to shoulder" during disasters. She added, "It's also a reminder that we need climate-change action now," Warren said. "Farmers are the stewards of the land and as Americans we need to support our farmers as they help us fight back against climate change."

Warren then went into her typical speech saying Washington, D.C., is working well wealthy people and corporations such as giant drug companies, but not people who need prescriptions. Washington is working for giant oil companies that want to drill everywhere, but not for people worried about climate change. "And it (Washington) is working just great for giant agribusinesses, just not for farmers who work the land," she said.

Warren argues when Washington, D.C., works for corporations but not people, "That is corruption, pure and simple." Warren said she would work to enforce antitrust laws into companies, and she would "unwind" the Bayer-Monsanto merger if elected president. Warren then drew a cheer when she took a shot at licensing restrictions on farm-equipment software. "Every person in this country, every farmer, should have the right to work on their own equipment." 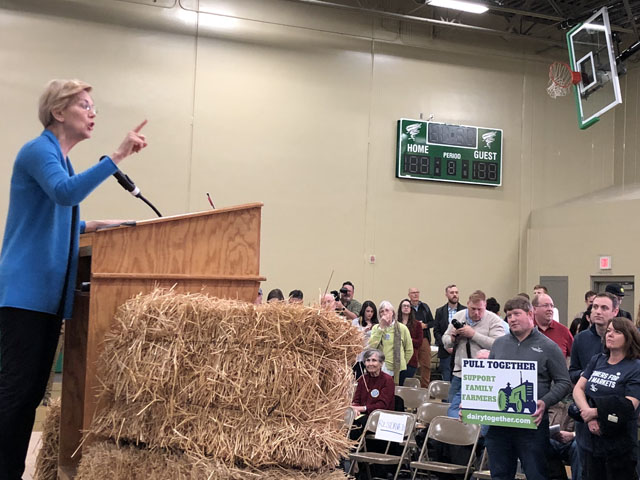