Congress has experts on agricultural policy and rural America. They largely operate under the umbrellas of the House and Senate Agriculture committees. Both committees are filled with sharp lawmakers and staff who know the challenges facing farmers, ranchers and rural America. They look for ways to boost incomes and investment in agriculture and rural areas, and they work to stem the challenges of bureaucracy away from their constituencies.

When it comes to climate change, though, aggies in Congress lay low. The two committees have gone a full decade now without holding hearings on climate change in any way, shape or form. In 2009, both committees held hearings on specific legislation, picking it apart without asking many questions about how agriculture or rural America could benefit further from policies surrounding renewable energy and mitigating greenhouse-gas emissions.

The void left open by the agriculture committees gets filled by people who don't understand the impact of volatile weather patterns on the U.S. food supply and can't make the connect between a growing world population and need for constantly rising food production. Without the agriculture committees, there's also largely little understanding about the strength of renewable energy production in rural America.

Congress at large no doubt has been so negligent in rational conversation about climate change. Naturally, then the task for drafting climate policy for this country of spacious skies, amber waves of grain and majestic purple mountains falls into the hands of wide-eyed idealistic liberal freshman from one of the boroughs of New York City who represents the seventh-tiniest congressional district in the country in terms of land mass. Rep. Alexandria Ocasio-Cortez, D-N.Y., has become a media darling across the political spectrum while barely holding off for two months.

Youthful idealism about changing the world will always be picked apart, but you might have thought Ocasio-Cortez's Senate partner in the "Green New Deal" would have learned from past mistakes. Sen. Ed Markey, D-Mass., was the Markey in Waxman-Markey a decade ago as a House member when then-Rep. Henry Waxman, D-Calif., drove a bill through the House Energy and Commerce Committee only to discover he had failed to give consider agriculture, or House aggies, when it came to votes. Only before the bill went to the floor did Waxman modify language to provide carbon offsets for agriculture. Still, proponents of the bill back then did a terrible job of including rural America in their efforts. A year later, rural Democrats suffered at the polls, partially because of confusion and disinformation over the climate debate. Markey somehow not only survived, but got bumped up to the Senate.

The FAQ page on the Green New Deal had stated, "We set a goal to get to net-zero rather than zero emissions, in 10 years because we aren't sure we'll be able to fully get rid of farting cows and airplanes that fast." They have tried to tone it down, but the damage has been done.

Another FAQ: What are you people thinking?

Here's a tip: America will not have an effective solution for reducing greenhouse gases unless rural America is on board. There isn't a viable strategy for renewable energy that doesn't require rural America to build it.

It's taken roughly a decade in rural America to recover from the climate conversation around cap-and-trade. But the idea of lawmakers who live in a place where there aren't any grazing cattle to suggest curbing emissions from cows show just how little the writers of the Green New Deal know about the rest of America. After all, there are more farmers and ranchers who own cows in this country than there are people who live in Ocasio-Cortez's congressional district.

In opening that door about taking away something from other people, the criticism deservingly flows and the backlash about and climate remedy grows. Republican senators got a chance to paint the Green New Deal as a power grab that would take away our meat, our means of travel and our way of life.

AOC and her overly aggressive counterparts have done an awful lot of damage in a short period to people trying to work on climate issues in rural America.

It would be great to find some adults in Congress to talk more realistically about climate policy than we see now. The incendiary and over-the-top debate over the "Green New Deal" begs that leaders in the House and Senate Agriculture Committees come out of their foxholes. The aggies need to hold serious, credible hearings for their members, and Congress as a whole.

There is a lot to talk about when it comes to changing the energy mix in the United States and what that could mean for our economy and environment. We could start with biofuels and low-carbon fuel standards. The Renewable Fuels Standard spurred from 2006 to 2013 a powerful economic shot in parts of the Corn Belt. Lawmakers from ethanol and biodiesel states are ardent defenders of the RFS, which requires producing biofuels that have lower carbon emissions than gasoline. Ethanol plants and corn farmers are working constantly now to tap deeper into California's market because of its low carbon fuels standard.

California's push for renewable energy even has gotten dairies across the country to capture methane so they can sell renewable natural gas into California. It's a small, but growing development that can generate some extra revenue for dairies, if they find a way to build a digester.

Wind power generates nearly 37% of power in Iowa, significantly more than the percentage or volumes produced in New York or Massachusetts. That wind power is responsible for paying rural landowners annual payments for the wind turbines on the land, as well sparking other industries to come to the state. Apple, Facebook, Google and Microsoft over the past decade have invested $5.6 billion in data centers in Iowa because they need cheap energy and they want to use renewable energy.

The drive for soil health has led ten companies and non-profit groups to form the "Ecosystem Services Market Consortium. The group's founders are ADM, Cargill, General Mills, Indigo Agriculture, Mars Incorporated, McDonalds, Noble Research Institute, the Soil Health Institute and the Nature Conservancy. The companies involved represent some of the largest buyers of commodities in the country. They want to create a market to improve soil-health practices, reduce greenhouse gas emissions, improve water quality and reduce water use.

A separate group, including the American Coalition for Ethanol, National Corn Growers Association, Minnesota Farmers Union and the Natural Resources Defense Council all submitted comments supporting a $25 million USDA pilot project to test and measure soil carbon sequestration. Famers involved in the project will be paid to implement practices that sequester carbon and improve soil health.

Outside of these projects, there are the bigger picture questions about risks to food production long-term from changes in long-term climate, water usage, pests and diseases that will affect agriculture as the planet continues to warm and population continues to rise. The National Climate Assessment last fall cites there are winners and losers in agriculture short-term, but as time continues, the implications become more negative across a larger area.

Getting to the root of renewable energy opportunities and long-term climate risks is, well, complicated. Still, this land of amber waves of grain is filled with competent scientists and experts who would love to explain the risks and potential benefits to Congress, including members of the House and Senate Agriculture Committees.

A few years ago, I got ambitious and wrote an e-book, "The Elephant in the Cornfield, the politics of agriculture and climate change." The crux of the book was that up until the mid-2000s there was growing consensus in agriculture about climate science and direction to move on policy. Climate change became more polarizing when President Barack Obama was elected and the topic became almost taboo. In my opinion, we always start on the wrong side of the ledger when talking about climate change and rural America. We also need to remember that in 2005 and 2007 Congress passed a policy that required lower greenhouse-gas emissions in a share of the petroleum market. Rural American and agriculture were the primary beneficiaries of that policy.

After listening to arguments about cows, hamburgers, veganism and outright dismissal of any reason to deal with climate policy, it is become long past time for leaders in agriculture to engage instead of allowing ridiculous, uninformed policy notions to spread like pigweed. 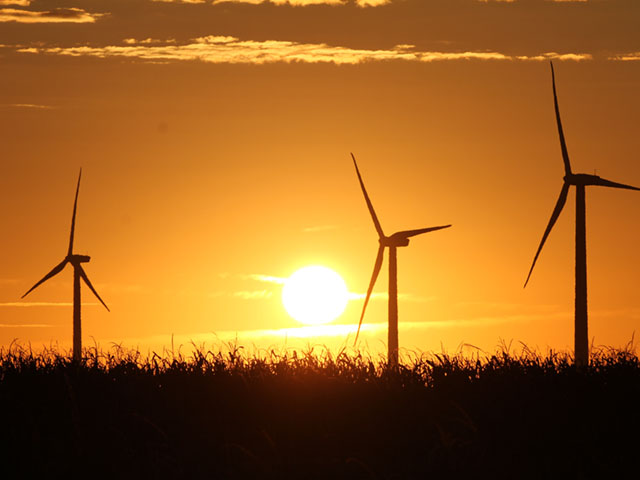