ORLANDO, Fla.(DTN) -- It was a more relaxed, comfortable Secretary of Agriculture that stood before farmers and ag industry leaders at the 2019 Commodity Classic here, compared to his previous visit with this audience one year ago in California.

Perdue took the stage in an open-collar print shirt and sweater vest, in contrast to his usual sport coat or suit and tie.

He quickly made reference to that previous appearance.

"Last year you all hadn't figured out whether you liked me or not," Perdue said in his Georgia accent, to the somewhat nervous laughter of the crowd. "That's all good."

Perdue then quickly focused on achievements during the past 12 months, one of which was passage of the 2018 Farm Bill. But he noted that there was much yet to do in clarifying rules around various programs. There has been some frustration from farmers in the past few weeks as they approached local Farm Services Agency offices looking for signup details, only to be told rules and even signup dates would be coming later than normal. The complexity of rule changes, and the temporary shutdown of the government which hampered rule-making efforts, have been blamed on the delay.

"We have the highest priority on the dairy program because that's the sector that suffered the most under the prior margin protection program," Perdue told reporters during a press conference following his speech. "These folks are going to do very well under the new farm bill. They just need to hang on until March, April, May. We'll have a roll out of different things all along there, and the signup will be probably sooner than most everything in the farm bill."

On other programs, such as new rules around Agricultural Risk Coverage, Price Loss Coverage or Conservation Reserve Signups will come after that. It's unlikely ARC or PLC rules will be set before spring crops are in the ground, he said.

"I think ARC and PLC give some good flexibility. CRP, I think we'll expand it and give some short-term answers in many places. This is a complex issue on CRP and we hope by the end of the year we can have all the rules. We don't think you'll miss a year of signing up," he told the farmer audience.

"They are very complex rules," Perdue later told reporters. "When Congress passed the Farm Bill I naturally thought 'let's go do it, let's implement it.' It doesn’t work that way. These agencies have to get down to the granular thing of defining what 'it' is.

During his 35-minute speech, Perdue walked through various issues ,including ethanol mandates, and trade, while often repeating his happiness with the support President Donald Trump has shown for farmers.

The applause and laughter those comments earned in 2019 was a strong sign that this year's crowd like him very much. 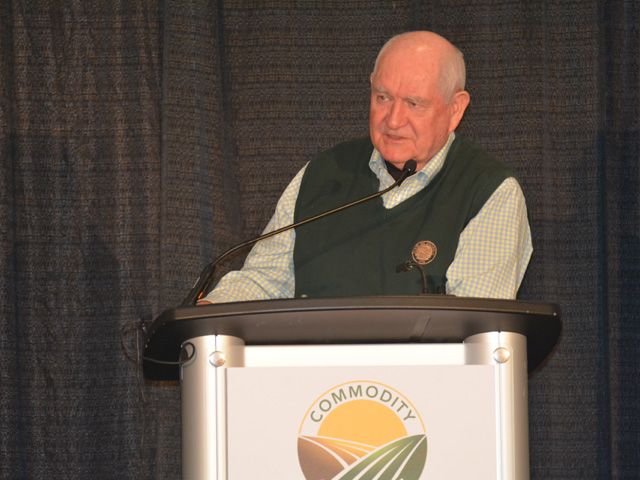