Leaders of the Senate Agriculture Committee are getting ready to move ahead on drafting a farm bill, ideally in April, and will seek to avoid the rancor over food assistance that has tied up farm-bill discussions in the House.

Roberts said senators are waiting on the Congressional Budget Office baseline for USDA programs, expected to be released April 9. He anticipates his committee could consider a markup shortly after.

"It's clear times are challenging in farm country, no matter what you grow, how you grow it, " Roberts said. "We are in a rough patch and in a time like this we are not looking to make revolutionary changes. We need to provide certainty and predictability to farmers, ranchers and producers all across the country."

Stabenow also said she's ready to move forward in drafting a new bill. "I think we're in a good spot going into the farm bill negotiations," she said.

"We intend to maintain a broad, bipartisan coalition to support a farm bill," Stabenow said, pointing to more than 500 groups from an array of interests who supported the last farm bill.

Roberts and Stabenow both stressed the importance of a bi-partisan bill and both reiterated they will not be walking the same path as the House when it comes to pushing cuts or significant policy changes to SNAP. Stabenow pointed out more than once that most of the savings in the past four years from the farm bill have come from fewer people on SNAP rolls.

"I'm not sure what the House is going to do," Stabenow said. "I know in the Senate we're going to move forward understanding we've got about $80 billion in savings from what we did last time on SNAP."

Senate members have already been introducing more than 40 different bipartisan marker bills related to farm-bill programs, Stabenow said. She also said the priority has to be to help with the farm safety net, considering farm income is roughly half of what it was in 2013.

"The farm safety net is in a bad spot and we've got to make sure that is strong," she said.

Stabenow criticized President Donald Trump's budget proposal that would cut $260 billion from USDA over ten years. Stabenow said Congress is largely ignoring that request. "We've all agreed we're not doing that," she said. "We couldn't write a farm bill if we had to put that many cuts in. Last time around we worked hard to get $23 billion in savings and it was not easy,"

A strong defender of crop insurance, Roberts said the conditions farmers are facing right now call for strengthening the crop insurance program and expanding it. Throughout hearings, farmers have largely indicated much of the same themes, he said. "We have consistently heard support for crop insurance. No. 1 issue, everywhere we have gone."

Roberts and Stabenow said they are determined to pass a bipartisan farm bill, as they did in crafting what became the 2014 farm bill.

Right now Roberts said the majority and minority are sharing farm bill language and working out differences. Asked about whether the Senate could go before the House in starting a markup on the farm bill, Roberts said, "We're not in a race." He and House Agriculture Committee Mike Conaway, R-Texas, have talked recently about time frame. Roberts added again that he must have a bipartisan bill.

"I've got to have 60 votes," he said. "We ought to get 70 votes so we can go in with some degree of strength whatever we do in the farm bill conference."

Roberts did say if mark up on the farm bill waned past April that it would lead to more talk of an extension of the current bill, which expires Oct. 1.

Roberts pointed out that times are challenging in farm country with the fourth, possibly fifth year in a row that prices will be below the cost of production. The weather hasn't helped, particularly in the southern plains.

"I don’t know what we've done to Mother Nature but she really has not been helpful," he said.

Roberts does not expect more funding for a farm bill, but said the funding that came in the budget bill for seed cotton and dairy programs have helped. "We have functioned under the assumption there will be no new money to spend on the new farm bill," Roberts said.

Roberts was asked about the prospects of farmers changing commodity programs after a new bill is completed.

"I'm going to make a prediction that a lot more people are going to be interested in PLC this time around," Roberts said.

Stabenow said she wants to find funding for 39 programs that collectively cost about $3 billion over five years of the farm bill. Those programs, however, do not have baseline funding built in to keep them carrying forward. Stabenow wants to find the dollars to continue those programs.

"These are a small part of the budget, but I'm very concerned and Sen. Roberts is very concerned that we find dollars because they are not in the baseline," she said.

Stabenow also talked about the fixes in the appropriation bill, which includes the Section 199A adjustment on taxes. The bill also includes a boost for wildfire funding and $600 million for high-speed rural broadband infrastructure. Language in the bill also clears up the situation for livestock producers by exempting them from EPA emission-reporting requirements.

Stabenow was not a fan of the process that put together the tax-cut package in December. The rush led to making a change to protect cooperatives that went too far. "I was thinking of becoming a co-op myself," Stabenow said to laughs. 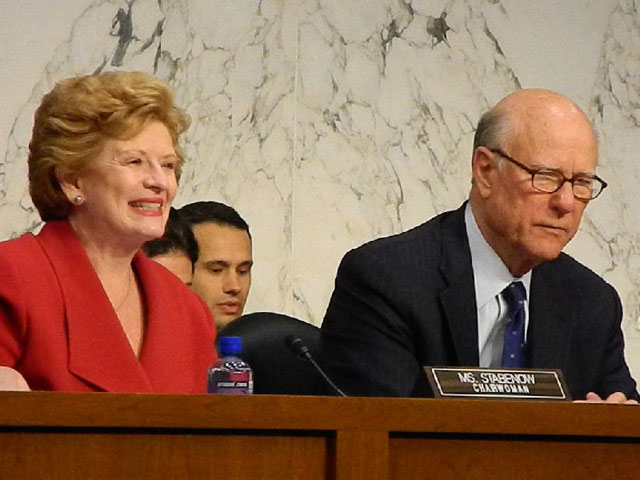