I've been thinking about the number 145,000 over the last few days.

Now, I'm a guy who likes my ice cream. And given that I'm approaching the mid-century mark, I figure I've eaten a lot of ice cream. I can't quite calculate out the math and I don't have a photographic memory, but I can state with supreme confidence that I have not eaten anywhere near 145,000 servings of ice cream in my entire life.

This is what makes a 1,600-word story published Tuesday in the New York Times just a wee bit out of whack. The New York Times reported that traces of glyphosate had been found in 10 of 11 samples of Ben & Jerry's Ice Cream. The testing for the ice cream was done by the Organic Consumers Association, which now has a specific "Take Action" notice on its website telling its supporters to demand that Ben & Jerry's go organic. In fact, OCA stresses that Ben & Jerry need to make the "life-or-death transformation" to organic.

Ben & Jerry, it seems, is part of the "natural" non-GMO crowd, but that's not good enough for the Organic Consumers Association. The OCA wants to make sure your 20 grams of fat, 25 grams of sugar and 50 grams of sodium come with a healthy "organic" label.

It's OK if you drop dead from diabetes, heart disease or obesity, but you will rest in peace knowing that you ate organic.

But you have to keep reading the New York Times story -- despite now having four corrections to the article since it was first published earlier this week.

The article states that the levels of glyphosate are "small." Just how small? Well, John Fagan, CEO of Health Research Institute Laboratories, which did the testing for OCA, calculated that:

- a 75-pound child would have to consume 145,000 eight-ounce servings A DAY of Ben & Jerry’s Chocolate Fudge Brownie ice cream to hit the limit set by the Environmental Protection Agency

The NYT boosts the claims by citing a recent study showing that rates consuming the same amount of glyphosate in a child's portion of the Ben & Jerry's ice cream showed early signs of fatty liver disease. Monsanto had earlier refuted that study in a January report on the work by Al Jazeera. http://www.aljazeera.com/…

The focus on the Organic Consumer Association's testing and the push against Ben & Jerry's has turned the NYT article a sensation on social media with everyone going to their respective corners in the GMO debate to declare outrage.

Just in looking at overall chronic liver disease rates in the U.S., it would be difficult to point to any kind of link or association to glyphosate. In fact, states where glyphosate is widely used as a pesticide -- Nebraska, Illinois, Iowa, Missouri and Kansas, for instance -- all fall on the lower rungs of chronic liver disease death rates, according to the CDC. Again, alcoholism, hepatitis obesity and diabetes are all factors in this equation. https://www.cdc.gov/…

Non-alcoholic fatty liver diseases is mainly associated with obesity and diabetes. It seems just a little odd to concentrate on the glyphosate rather than some of the larger concerns of eating high volumes of fatty, high-sugar ice cream if you are at all concerned about the risks of liver diseases.

The NYT article did note the Food and Drug Administration in the past has excluded glyphosate from an annual report the agency produces on pesticide residue in food. After some criticism from the Government Accountability Office, the FDA is in the process of testing corn, soy, eggs and milk for glyphosate residues. It will certainly be follow-up reading when the FDA comes out with more details about glyphosate residue.

I'm still stuck on the volume levels -- 25,000 to 290,000 eight-ounce servings of ice cream A DAY -- to pose a threat from the glyphosate. Diabetes and heart disease be damned. And then I have to wonder how much the Organic Consumers Association was able to get this "scoop" in the NYT. 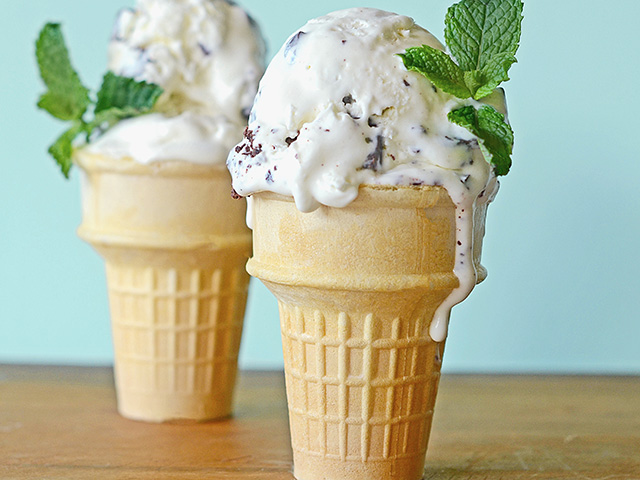