Climate scientist and activist James Hansen spent the weekend in Omaha as part of an effort to engage billionaire Warren Buffett and Berkshire Hathaway shareholders on the risks of climate change.

He gave a speech Friday night, "Energy and Climate Change: How Can Justice Be Achieved for Young People?" to a crowd of more than 500 people at Creighton University, most of whom were already converts to his message.

Reuters had an article Monday showing most of the world's largest investors aren't thinking about climate change. http://www.reuters.com/…

Nebraskans for Peace had written letters to Buffett in previous years asking him to get engaged in the climate discussions, but Buffett had rejected those calls. So the group turned to its foundation and began raising money to buy a single Class A share of Berkshire Hathaway stock (valued at about $180,000 at the time) so the group could submit a shareholder resolution.

Nebraskans for Peace and the group Bold Nebraska also held a rainy rally outside Berkshire meeting after Hansen and others presented their resolution at the shareholder meeting.

Hansen, a native of Denison, Iowa, was director of the NASA Goddard Institute for Space Studies from 1981-2013. He stepped down to join the Children's Trust lawsuit, a case involving a group of teenagers suing the federal government for not protecting them from pending climate catastrophe. The lawsuit won a victory about a month ago when a federal judge denied a motion by the federal government and fossil-fuels industry to dismiss the lawsuit. Hansen also is a plaintiff in the case with the 21 youths.

The current generation gets the benefits of fossil fuels while leaving the consequences to the next generation, Hansen told the Creighton crowd.

"The danger is we are going to hand people a situation that is out of their control and we are very close to that point."

Hansen began sounding the alarm in the late 1980s that the trend of warmer temperatures should be attributed to greenhouse-gas emissions from fossil fuels. He also believes the United Nations Intergovernmental Panel on Climate Change, the IPCC, is too conservative in its reports on climate that come out about every four or five years.

He explained that oceans and ice sheets have great inertia and respond slowly, but those responses are beginning to happen along with changes that we've already made to the atmosphere.

"We're kind of at the point now with emissions that we guarantee we cannot avoid sea-level rise of several years because the ocean is continuing to get warmer and it is the warming ocean that is melting the ice shelves around Antarctica and Greenland," Hansen said.

Ice-sheet melt and multi-meter sea level rise become inevitable, leading to permanent flooding and the risk of losing coastal cities and islands. Hansen just recently produced a paper suggesting that sea levels could rise by a meter within 50 years.

"The science is absolutely crystal clear," Hansen said. "We cannot burn all the fossil fuels."

In a press call I asked Hansen about the impacts of climate change on agriculture Hansen noted he wasn't much an expert in that arena and is more focused on the impacts of sea-level rise. Regarding other impacts, he said weather becomes more volatile as emissions increase.

Talking to a university audience in a state that prides itself as the number 1 state in the country for processing red meat, Hansen also drew applause at Creighton when he told them one way to reduce their climate impact is to eat less meat. That may have been a somewhat shocking development in the state of Nebraska. Responding to a question about personal actions, Hansen said some responses have a negative feedback. For instance, if we just cut fossil-fuel use and rode bicycles everywhere, that would lower the price of petroleum and someone else would buy it cheaper and burn it. He suggested other actions, such as eating less meat, might not have the same negative economic response.

"But there are some actions that you can take that don't have this negative feedback," he said. "One example is to become less of a meat eater and more of a vegetarian. You don't have to totally become a vegetarian, but if you move in that direction then you have done something and put less pressure on the land. I don't see any negative feedback for that."

While conservatives and fossil-fuel companies maintain the Obama administration's Clean Power Plan is regulatory overreach and would harm the economy, Hansen maintains the administration response and the goals established in the Paris climate pact aren't nearly enough to respond to the risks facing the planet. Hansen is calling for fossil fuels to carry their price to society through a progressively increasing carbon fee, initially pegged at $10 a ton that would rise annually from there.

Such a fee, just in the U.S., would generate about $600 billion a year, which Hansen argues could be distributed back to every legal resident at about $1,500 per person. Such a fee would reduce greenhouse-gas emissions 30% over 10 years and 50% over 20 years.

Hansen wants a rising carbon fee tied to products, a fee that would rise steadily over time. Such a fee adds an "honest cost" to the price of fossil fuels.

"The main reason you want to do that is to provide the incentive for the business community and entrepreneurs to develop products and energies that are carbon free or low carbon," Hansen said. "And that way you move in an economically sensible way to clean energies."

A carbon fee must also be global. To make that work, the two most powerful economies, the U.S. and China, must agree to a carbon fee that would force the rest of the world to participate. Hansen believes a carbon fee makes economic sense even though it is not being pursued as a solution. The U.S. alone cannot push to reduce its fuel use because that will simply lower the price of fossil fuels can prompt others to burn more.

"If you don't increase the price of the fossil fuel and make it honest, you can't solve the problem," he said. Hansen stressed that several times. "I say it's just as certain as the law of gravity, as long as fossil fuels are allowed to appear to the consumer as the cheapest energy, then you cannot solve the problem."

There are a few bills in Congress to implement a carbon tax but they have little support at the moment. Republican presidential candidate Donald Trump rejects climate change and argues that any such proposal would hurt the economy. Democrat Hillary Clinton supports action on climate change, but has not spelled out any changes beyond those being pushed by the Obama administration.

To the dismay of some of the youth he was addressing, Hansen said climate goals can't be achieved by renewable energy alone. A more reliable source is needed. Thus, he also supports nuclear power. He argues that current federal rules hinder any new nuclear development in the U.S., but that needs to change. Hansen said he believes new technology can ensure the safety of nuclear power while generating emission-free power.

"To rule out the safest form of energy that we have and demonize it the way some environmentalists have decided to do is wrong," he said. 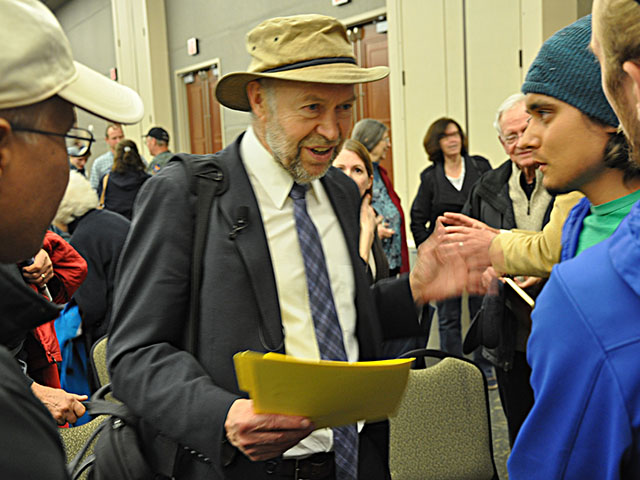