Sometime in the mired five-year rigmarole of the farm bill, I decided I needed to break away from covering agriculture through political spats and the committee rooms of Washington, D.C., and rediscover a little bit of rural America in the process.

I like driving back highways off the interstate. I like to stop in the small towns along the way. So I hatched the idea of cruising down the remains of U.S. Route 66 and taking a look at the history, the towns and different kinds of agriculture and farming businesses along the route.

There is a lot of history written about Route 66, --- some of it contradictory-- on how the road was formed and who the real leaders were that helped create the highway. Clearly, as cars became the main mode of transportation for Americans, business leaders were looking for ways to build longer ribbons of road to connect the Midwest to the West. Route 66 was developed in the 1920s and 30s as one of the main arteries for getting from Chicago to California.

A wonderful older lady serving pie at the Hangar Kafe in Miller, Mo., recalled how there was a constant chain of gas stations, roadside food stands and places for people to park and stay overnight along the old route. Farm kids sold baked goods. There was constant conversation between weary travelers and rural Americans trying to make a living. Route 66 became "America's Main Street."

Better cars and the interstate system took a lot of that away as the 1950s and 60s advanced. Route 66 became the stuff of lore from the John Steinbeck's "Grapes of Wrath", Nat King Cole's song, "Get Your Kicks on Route 66," and a television show, "Route 66," that largely was filmed elsewhere.

On June 27, 1985, U.S. Route 66 was officially decommissioned as a federal highway. Much of what has happened since then on Route 66 is credited to people drawn to the history and nostalgia of the road and its preservation. The route, at least through Illinois and Missouri, is a hodge-podge mix of state highways that weave through the towns that carried the old highway. Some original sections remain while others have been replaced.

Towns can whither when bypassed by the interstate or they can redefine themselves. Some towns have been quite good at emphasizing their heritage for both the highway and their agriculture. The Palms Grill in Atlanta, Ill., is just down the block from grain elevator museum that dates to the 1800s. The Palms also reflects all the great small-town cafés and restaurants that travelers can find along Route 66. I also recommend the Hangar Kafe where you can watch crop-dusting planes take off and land at the air strip while admiring the model planes hanging overhead.

I sought out different mixes of farmers or agribusinesses along the highway in Illinois and Missouri. The agriculture census allowed me to take a look at major changes in production from the 1930s until now, such as the shift from dairy to beef cattle in southwest Missouri, or the production of horseradish in western Illinois. I tried to strike a balance between both local niches and major agricultural production sectors.

More farmers are embracing local foods and fresh produce along the route. I stopped by a four-acre strawberry patch near Miller, Mo. The Millsap Farm outside of Springfield, Mo., is really an inspirational story of how a young family has made a life in agriculture on a small tract of land.

Rain was kind of detriment as I hit Illinois and Missouri. It was raining cats and dogs as I was forced to bypass the St. James Winery in Missouri. Due to prohibition, the winery industry in Missouri lost out on the early development of the highway, but it is again a reflection of the changes in agriculture and tourism along the route today.

One of the most fascinating aspects of Route 66 is the level of foreign tourism. Every shop owner has their own anecdote about foreign travelers. I met a Canadian engineer along the road in Illinois who had started bicycling the route two months earlier in Santa Monica. At Funk's Maple Sirup in Illinois -- (Yes, that's spelled correctly and there is a story behind it.) -- the young lady behind the counter commented she has had her photo taken with more Japanese families than she cared to count. Mother Road Coffee in Carthage, Mo., was started by Ed and Kara Hardesty just last year. The couple moved from the Seattle area to start their business. On the first day they opened, a busload of French tourists swarmed the place. Kara said she felt a little pressure as she was still learning how to use the espresso machine.

Just this week I came across a news release that a Chinese-language television network, ICN TV Network, is running a two-week show this month, "Joy in America: Exploring Route 66 Reality Show."

I'm looking forward to moving along on Route 66 through Kansas, Oklahoma and Texas later this month, then picking up the route again a little later in August in New Mexico, Arizona and California. I also am looking for some other farmers, ranchers or unique agribusinesses to profile along the way if you have some suggestions to pass along.

In the meantime, I think I will have achieved a lot when I'm standing on a corner in Winslow, Arizona ...

For a look at some of the sights along Route 66 in Missouri and Illinois, check out my photo album. http://dld.bz/… 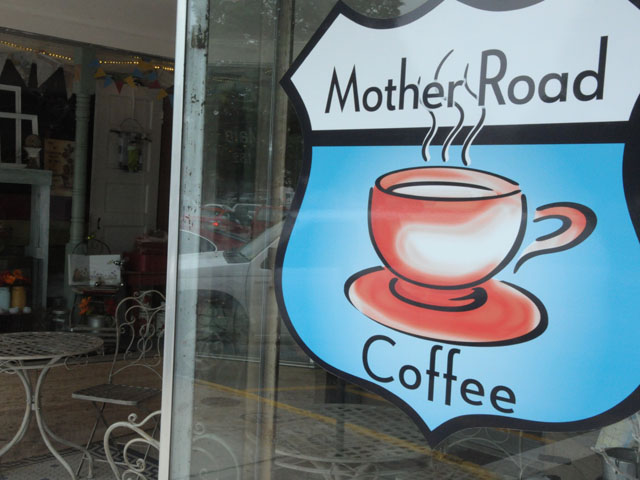