Brent Crude Oil: The spot-month contract closed at $52.65, up $4.73 on the monthly chart. Despite the higher monthly close the major (long-term) trend remains down. The rally was a result of a minor (short-term) uptrend that had the spot-month contract testing resistance near $52.23. This rally looks to be Wave B (second wave) of a major 3-wave downtrend that still has a targeted low of $42.73, then $37.51.

Propane (Conway cash price): Conway propane closed at $0.7000, up 14.50cts on its monthly chart. The July rally looks to be Wave B (second wave) of the ongoing major (long-term) 3-wave downtrend that began with the bearish reversal posted in February 2017. Cash propane tested resistance at $0.7200 in July, a price that marks the 50% retracement level of Wave A. Wave C has a target price of $0.4714. 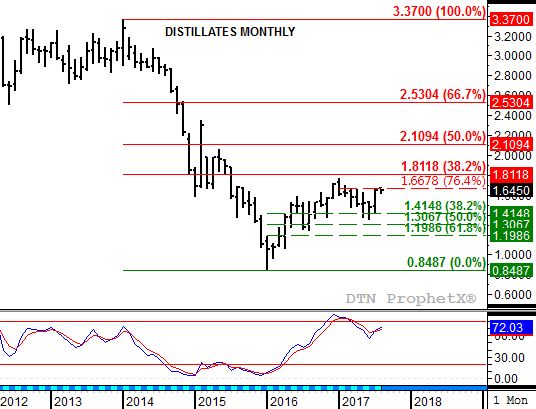