Corn (New-crop Futures): The December 2017 contract closed 15.25cts lower at $3.89 1/2. Dec corn's secondary (intermediate-term) trend still looks to be sideways in an expanding range between the 4-week high (last week's high) of $4.17 1/4 and 4-week low of $3.74. However, the contract's stochastics on its short-term daily chart never established a bearish crossover above the overbought level of 80%, leaving the door open for the contract to at least retest last week's high of $4.17 1/4. The fact the contract held support at $3.84 1/4, a price that marks the 76.4% retracement level of the previous rally from $3.74, could also be viewed as a short-term bullish signal. On the other hand, trade volume was lower on rallies seen last Tuesday and Friday than sell-offs seen on Wednesday and Thursday. This could be considered bearish, indicating a test of the previous low is possible.

Soybeans (Old-crop Futures): The August contract closed at $9.89, down 12 cents for the week. Similar to the NSI.X, August soybeans' secondary (intermediate-term) trend remains up despite last week's lower close. However, its minor (short-term) trend turned down as daily stochastics established a bearish crossover well above the overbought level of 80%. The contract is holding above support at $9.68 1/2, a price that marks the 50% retracement level of the minor uptrend from $9.04 1/2 through last week's high of $10.32 1/2. Given daily stochastics remain near 80%, an extension of the minor trend to the 61.8% to 76.4% retracement levels of $9.53 1/4 and $9.34 3/4 is likely. As with corn futures, daily volume decreased on Friday's rally versus Thursday's sell-off.

Soybeans (New-crop Futures): The November 2017 contract closed at $9.84 down 14 cents for the week. Similar to cash and old-crop August, new-crop November soybeans' secondary (intermediate-term) trend remains up despite last week's lower close. However, the contract's minor (short-term) trend turned down in dramatic fashion. Last Friday's close showed a test of support at $9.93 1/2, a price that marks the 38.2% retracement level of the previous uptrend from $9.07 through the high of $10.47. Given daily stochastics are still near the overbought 80% mark Nov beans could test the $9.77 to $9.60 1/2 area. 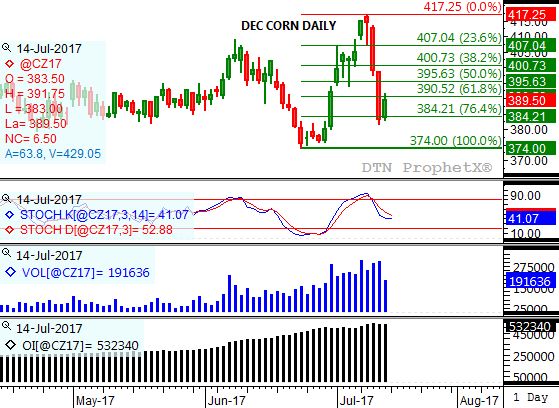