Lean Hogs: The October contract closed at $66.025, down $17.725 on the monthly chart. The lean hog monthly chart is another illustration of one of the problems using continuous most active futures. July saw a roll from the August contract to October as the most active, with the spread between the two at approximately $15. This created a bearish reversal on the market's monthly chart, despite the October only losing only $4.425 on its individual monthly chart. However, using a continuous nearby contract monthly chart the August issue still showed a bearish reversal, trading outside its June range before closing $10.325 lower for the month. Both charts would indicate the major (long-term) trend has turned down.

Soybean meal: The more active December contract closed at $325.40, up $19.20 on the continuous monthly chart. Soybean meal posted a bullish gap up last month between the June high of $309.80 and July low of $314.10. This would suggest that the market has resumed its major (long-term) uptrend that began back in March 2016 with a bullish crossover by monthly stochastics below the oversold level of 20%. 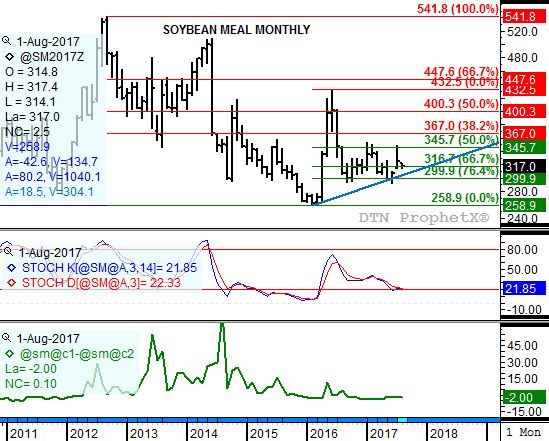