Like a stampede, it's easy to get caught up in the ongoing bullish charge by the soybeans and corn these days. However, Friday's (June 10) close in the corn market could be an indicator that at least some of the raging bulls are starting to get a little tired.

One of these could be the new-crop December corn futures contract. If we get rid of all the noise of price movement and focus only on the weekly close (red line on the chart) our brain immediately reads this as a strengthening uptrend. And by all the technical measures I use, it is. But (isn't there always a "but"?) the last 5 weeks December 2016 corn (CZ6) has been running almost step for step with its 10-year seasonal index (blue line), and that's what causes the warning flags to fly.

This particular seasonal index averages weekly closes by December corn contracts for the previous 10 years, for the 52-week period from the first week of the previous December (e.g. 2015) through the following November (2016). Then I average all 52 weekly averages, and divide each individual weekly average by the overall average. This gives me a weekly percent that can be charted, showing the normal peaks and valleys new-crop corn posts over the course of a year. Comparing movement by this year's contract shows us potential fundamental differences from a "normal" year.

Take a look at the index again. Notice that this past week, the second week of June, is usually the high point of the 52-week period at 105%. From here the December corn futures contract tends to move into a downtrend (note the distinctive Elliott Wave 3-Wave pattern) that lasts through the first weekly close of October. This low is at 94% meaning Dec corn tends to lose 11% of its value during the downtrend.

This past week CZ6 closed at $4.30 3/4, which projects to an early October low weekly close of roughly $3.83 1/4. If the contract follows its seasonal index, the downtrend would take CZ6 back to support near the 76.4% retracement level of the uptrend from $3.69 3/4 (week of March 28) through this past week's close. Usually for a retracement to be that deep the contract/market tends to have bearish fundamentals. According to USDA, the U.S. is projected to produce a record crop of 14.43 billion bushels. If realized this could be the bearish fundamental the contract needs to pull back that far.

On the other hand, the December-to-March futures spread is trending up (weakening carry) reflecting the market's opinion that underlying market fundamentals are far more bullish than what is seen in USDA's reports. Given the weak level of full commercial carry the new-crop forward curve (series of futures spreads) covers, a potential pullback by CZ6 could be limited to the 33% to 50% retracement levels. This puts weekly close targets near $4.10 1/2 and $4.00 1/4 respectively.

Could CZ6 continue to stampede next week along with the rest of the grain complex? Sure. But keep in mind the cowboys of the FOMC, led by Chairwoman Yellen, could round things up quickly with a June interest rate increase. If so, this could be the catalyst for CZ6 to move into its seasonal downtrend. 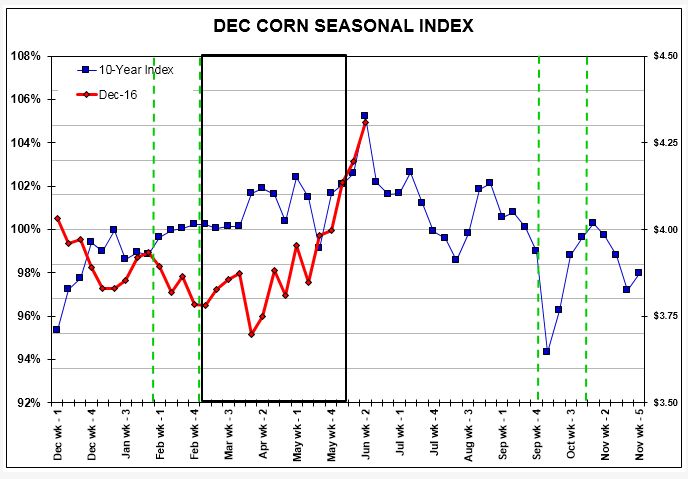