The new-crop December 2016 corn contract certainly has a flair for the dramatic. This past Monday it posted a high of $4.46 3/4, equaling its high from July 13, 2015 before traders lost interest and the contract closed at $4.40. The following day, Tuesday, saw Dec corn come under early pressure that pushed it to a low of $4.32 3/4. Then, as is so often the case this time of year, new-crop corn found new life after the release of midday weather forecasts calling for extended heat for the U.S. Midwest.

Faster than you could sing "Pop Goes the Weasel", corn was rallying again with Dec quickly moving back to within striking distance of its July 2015 high. But, always the drama queen, a high of $4.46 1/2 was followed by a dip as Tuesday's session entered the homestretch after 1:00 p.m. Dec corn continued to bounce between $4.46 and $4.46 1/2 through the close at 1:15, looking for all the world like it wanted to do its magic during the overnight session.

But a funny thing happened between the close and settlement: The contract posted a new high of $4.47.

Why is this significant? From a technical standpoint it signals an extension of the contract's uptrend that began with its bullish reversal this past April that included a low of $3.64. More importantly, it now projects an upside target near $5.30.

How do we get there? The pattern on the contract's monthly chart is a classic double-top formation, again supported by April's key bullish reversal. When a double-top is taken out you take the range from the top to the interim low, in this case $3.64, and add that to the breakout point of $4.47. Note that an extended uptrend to near $5.30 results in a test of resistance near $5.22 1/2, a price that marks the 76.4% retracement level of the contract's range from its high of $5.71 1/4 (December 2012) through the previously mentioned low of $3.64.

But (Isn't there always a "but"?), what about the fact the contract took out its previous high by only one tick, and in the settlement range no less. Market bears will argue that a more conclusive breach of the previous high needs to be seen, otherwise the double-top continues to hold and the contract's seasonal downtrend in play (for discussion on this, see my Technically Speaking blog from Friday, July 10, 2016).

The situation in December corn could be made more interesting Wednesday, particularly if it does move substantially above its previous high during the overnight session. This would signal a more conclusive bullish breakout just ahead of any announcement from the Federal Reserve regarding interest rates later that afternoon.

For now the contract looks more bullish, but we need to see what happens starting at the open of the Tuesday overnight session and lasting at least through this Friday's settlement.` 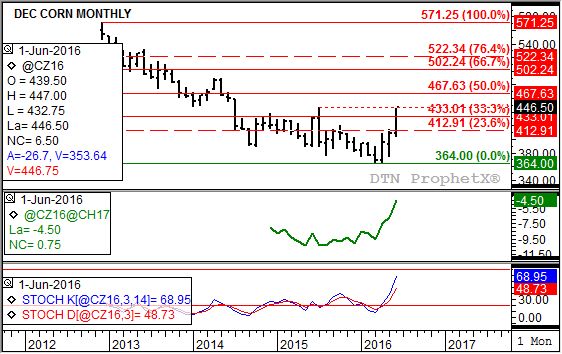