The export woes for soybeans continue with President Trump tweeting about his disappointment that China has not purchased large amounts of U.S. agricultural products as he said he was promised at the G20 meetings in Japan.

The problem is, China says they never said such a thing and nothing is on the table until tariffs are removed.

This comes amid word that China's June soybean imports totaled just 6.51 mmt, a 2.2 mmt decline from last year and 850,000 mt drop from May.

If this pace continues, it would indicate that China would take just under 80 mmt for the CY 2019, all to do with trade wars and the unrelenting spread of African Swine Fever.

Along these lines, the accompanying graphic shows what we had done with corn earlier, which is reporting on the amount of new crop U.S. soybean sales on the books as of the first week in July in million bushels for the marketing year starting September 1st on the left hand axis.

On the right hand axis, these sales as of the first week of July are plotted as a percent of the USDA's July new crop export projection along with the U.S. share of world soybean trade.

This chart is ugly all the way around as it reflects the very sobering U.S. export situation for soybeans.

This represents just 5.1% of the 1.875 billion bushel 2019/20 export projection, the lowest percent of new crop soybean sales on the books as a percent of the USDA's July WASDE export projection also since the 2005/06 marketing year when they were 4.2%.

Finally, the ongoing trade wars and the inexorable rise in South American oilseed production will result in the U.S. share of the world soybean export market at 33.7%, which is, as the graphic attests, the lowest percent in at least 25 years if not longer. 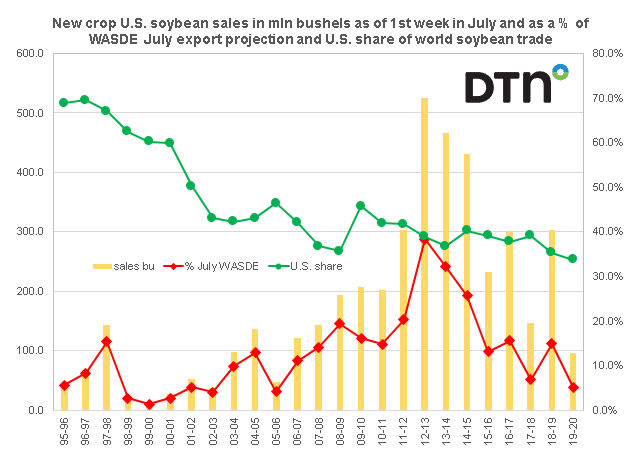