While most attention on the U.S. corn situation is focused on supply-side considerations with a large amount of uncertainty about planted acreage and yields given the record slow planting pace, this past spring, a rather dreary demand outlook has helped cap gains, especially on the export front.

This post reports on the amount of new crop U.S. corn sales on the books as of the first week in July in million bushels for the marketing year starting September 1 on the left hand axis.

On the right hand axis, these sales as of the first week of July are plotted as a percent of the USDA's July new crop export projection along with the U.S. share of world corn trade.

As expected, in this week's WASDE report USDA pared this year's corn exports by 100 million bushels (mb) to 2.100 billion bushels (bb) after shaving it by a similar amount in the June WASDE from the prior month.

They did keep the 2019/20 projection at 2.100 bb but that was after a 175 mb reduction last month. Cheaper overseas offers especially from Russia, Ukraine, Brazil and Argentina, large supplies already in importing nations, a high valued dollar and the ongoing trade wars are all weighing on our overseas sales efforts.

In that regard this year's total sales as of the first week of July for the new crop year are a mere 127.0 mb, essentially tying the 2017/18 season as the lowest new crop sales on the books for this date since the 2010/11 season.

This represents just 5.9% of the 2.10 bb WASDE export projection for next marketing year which is the lowest percent of new crop corn sales on the books for this period in time since the 2010/11 marketing year.

We would not be surprised to see the export projection come down further especially if the USDA lowers this year's corn crop and hikes its projected market price in upcoming production and supply-demand reports. 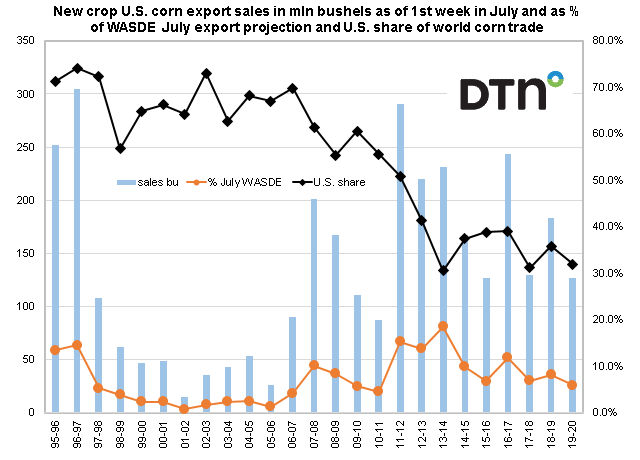