News this week from USDA that 85% of the nation's soybeans were planted as of June 23 means close to 13 million of intended acreage was left to plant.

Like corn, the 2019 U.S. soybean crop was planted at the slowest pace ever so we are curious what this means in terms of the crop emerging from the ground, blooming or flowering as part of its critical reproductive process and the percent of the crop dropping leaves signaling the plant was mature ahead of the first fall freeze.

While the USDA has been releasing soybean crop progress markers such as percent planted, percent blooming, and percent dropping leaves since the early 1980's, they only started recording the percent emerged since 1999.

The 20-year average number of days after May 1 for the 50% mark for emergence, blooming and dropping leaves is respectively 32, 78 and 142, which corresponds to June 1, July 17 and September 19.

Last week's USDA weekly crop progress and condition report indicated that 50% of the U.S. soybean crop had emerged as of June 15.

If this year's crop develops on average, 50% of this year's soybean crop will be blooming by July 31 and 50% will be dropping leaves by October 3.

This means that the crop will be blooming and dropping leaves much later than normal.

Though soybeans are a photoperiodic crop whose development is influenced by the amount of daylight hours, the lateness of emergence could result in lower yields and a good part of the crop vulnerable to a normal first fall freeze date, let alone an early one. 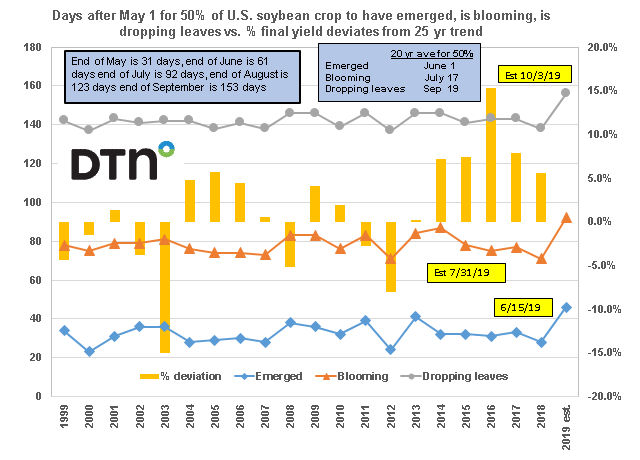