This week's soybean crop progress and first condition report of the year was even worse than the trade feared.

This suggests there are at close to 13 million acres left to put in the ground during the last week of June.

The USDA reported that 71% of those soybeans planted have emerged and though that is 16% better than the prior week, it is still 20% behind average.

Still, with over half the crop out of the ground, USDA did go ahead and issue its first soybean crop condition report of the year and it was even worse than the meager trade expectations.

Only 54% of the crop was rated as either good or excellent when the trade was looking for a 59% figure.

This stands in contrast to last year when the first soybean crop rating of the year came in at an all-time high of 75%.

This graphic shows the initial USDA weekly crop ratings for soybeans on the left hand axis and compares that to the percent that final U.S. soybean yield deviated from the 25-year trend on the right hand axis.

The combined good and excellent rating at 54% is the lowest since 1992 when it was 51%, though a year later in 1993, a season that is increasingly being compared to this year, it was 55%.

However, employing our usual ratings system (where we weight the crop based on the percent in each category and assign that category a factor of 0.2 for very poor, 0.4 for poor, 0.6 for fair, 0.8 for good, and 1.0 for excellent and then sum the results), the first national soybean crop rating for 2019 comes in at 68.8.

To be truthful, first week crop conditions have a very low correlation to final yields and note that in 1992, soybean yields that season were record high at 6.0% above trend, though in 1993 they were 9.1% below trend.

No doubt however that this crop is well behind the eightball given a record slow pace of plantings and emergence and the lowest initial crop rating in at least 30 years. 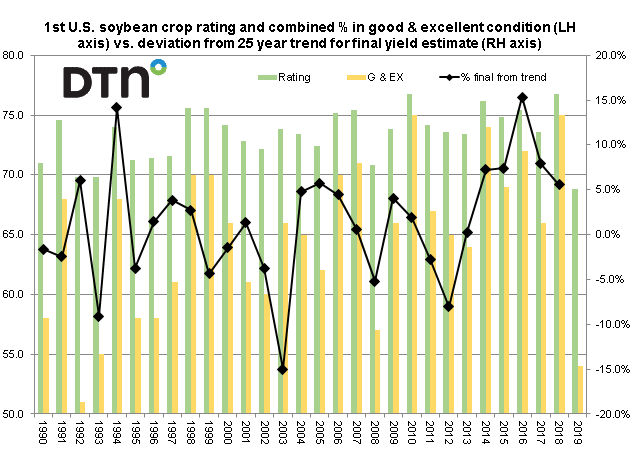