USDA will release its June Acreage report on the 28th but there will be a lot of uncertainty.

During the survey period the first two weeks of June, many Midwest farmers were still trying to seed, or rather "mud", their crops in or else decide whether to take the prevented planted guarantee provision in their crop insurance.

Note that USDA in its June WASDE report has already responded to the record spring rainfall for corn by paring planted acreage by three million acres and lowering the forecasted yield by 10 bushels per acre, but really those are just educated guesses.

This graphic shows the change in planted acreage for U.S. corn and soybeans from the end of March Prospective Plantings report to the June Acreage numbers on the left hand axis in thousands.

This is really an unprecedented situation as this year on May 19 only 49% of the corn crop was in the ground while on June 2 only 39% of the soybeans had been seeded.

This chart shows data going back to 1985 and there is no year where planting progress has been tardier.

No surprise then that the years where the largest corn acreage declines from March to June occurred in 1993 and 1995 at 2.277 and 3.315 million acres respectively.

We understand that the USDA will do a special resurvey on acreage as part of its August crop production report though it is likely the trade may not have a clear idea about what is in the ground until the Farm Service Agency starts releasing prevented planted acreage data in October.

Clearly planted area will be down so the next question is what will yields look like, and for a variety of reasons in that regard both the corn and bean crops appear to be in trouble. 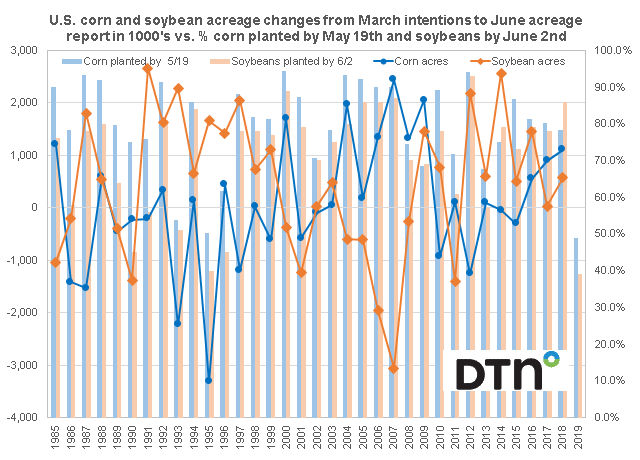