With record rainfall recorded in much of the U.S., especially in the Corn Belt, analogies are being drawn between this year and 1993.

There are not too many years where domestic grain and oilseed production have been depressed due to excess moisture given the oft cited mantra of "rain makes grain" but 1993 was one of those few seasons and 2019 is shaping up that way.

This graphic shows the end of May Palmer Drought Severity indices for the end of May 1993 and end of May 2019 for the top 21 corn and soybean producing states plotted on the left hand axis.

15 states are among the top producers of both with CO, PA and TX just in the corn category and AK, LA and MS just top soybean producing states.

As we have noted before, the Palmer Drought Severity Index (PDSI) is an index of the relative dryness or wetness effecting water sensitive economies while also indicating the prolonged and abnormal moisture deficiency or excess.

While the situation in 1993 was exacerbated by continued heavy rains in June and July the fact is that there are only two states, CO and LA that have lower PDSI ratings now as opposed to 26 years ago and 15 of the 21 states have present PDSI readings above that +4.0 level.

This excess moisture along with the record late plantings of the crops has raised fears that final U.S. corn and soybean yields could come in well below trend and the USDA seemed to have acknowledged this when they pared the 2019 corn yield by 10 bushels per acre to 166.0 in last week's WASDE report.

Obviously summer weather will have a huge bearing on this year's yields but the right hand axis shows that final 1993 yields for the corn and soybean crops in the top producing states did not fare that well. 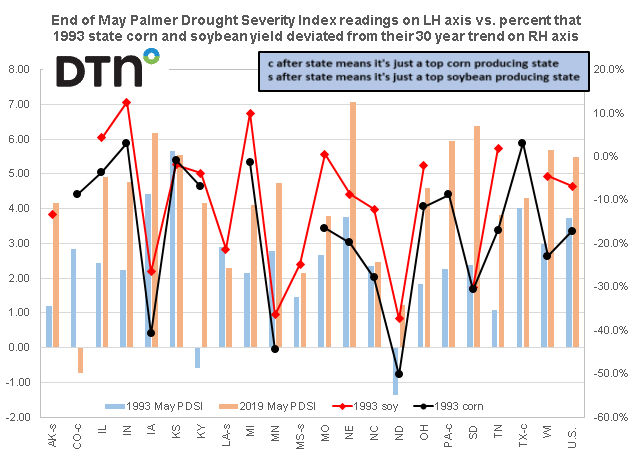