As we have done on a number of occasions this time of year, this graphic shows the new crop November soybean/December corn ratio the day before Thanksgiving on the right hand axis.

The change in both corn and soybean acreage from the final planted figure the prior year to the following March planting intentions figure is on the left hand axis.

This high ratio had the intended effect of increasing planted soybean area and lowering corn acreage and this is what happened as the March 2017 planting intentions report showed soybean acreage up 7.3% from the final 2016 planted figure, while the March 2017 planting intentions report indicated U.S. corn plantings acreage down 4.3% from the final 2016 planted figure.

A general rule of thumb is the average ratio has been 2.35 and a figure over that tends to encourage soybean plantings over corn and a ratio below 2.35 is generally seen as more favorable for corn as opposed to soybean seedings.

The absolute level of prices can be important also as high prices for both commodities, regardless of the ratio, could prompt increased seedings of both.

In a year such as this, where both forward corn and soybean values are relatively low, it could result in reduced plantings of each.

With the U.S. engaged in a number of trade wars, particularly with China, soybean prices have faltered on a percentage basis more than corn and this had fueled ideas that 2019 U.S. soybean plantings would contract sharply wth some of the freed up land being seeded to corn.

We do note however that the current SX2019/CZ2019 ratio at 2.35 is rather neutral, while the delayed 2018 row crop harvest in much of the Midwest has been dragged out by ongoing wet weather limiting fall tillage and fertilizer application which may further cap any real expansion in planted corn acreage next spring. 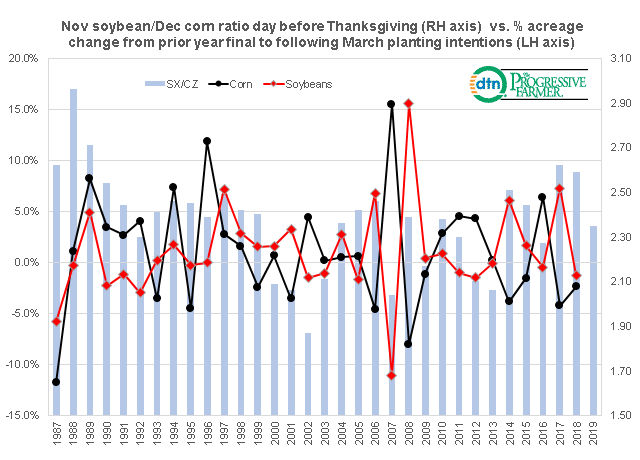