According to NOAA, above-average summer temperatures spanned most of the nation, with only one state having near-average June-August temperatures.

Twenty-three states across the West, South and Northeast had much-above-average summer temperatures which included record warm readings in Rhode Island and Utah.

Of particular interest is the fact that the nationally averaged minimum temperature (overnight lows) was exceptionally warm during summer at 60.9°F, 2.5°F above average and 0.1°F warmer than the previous record set in 2016.

In general, since records began in 1895, summer overnight low temperatures are warming at a rate nearly twice as fast as afternoon high temperatures for the U.S. and the 10 warmest summer minimum temperatures have all occurred since 2002.

This has special relevance for corn where high nighttime temperatures may be the culprit if final 2018 yields come in below expectations.

This graphic shows the 1960-2018 average summer (June-Aug) temperatures in the top corn and soybean states in degrees Fahrenheit with 2018 values on the left hand axis and rank of 2018 from 1960-2018 on the right hand axis with number 1 meaning this was the hottest average summer temperature between the period 1960-2018 and 58 means it was the coolest summer since 1960.

The data shows all 21 states (15 producing both corn and beans and 3 each just either a top corn or soybean state) had temperatures above the 1960-2018 average with Colorado, Michigan and Texas having readings at least two degrees above average.

Every state also saw their 2018 average summer temperature rank in the top half of the 1960-2018 range led by Colorado which had its third hottest summer since 1960, Texas its fourth hottest, Louisiana its fifth hottest and Mississippi its sixth hottest. 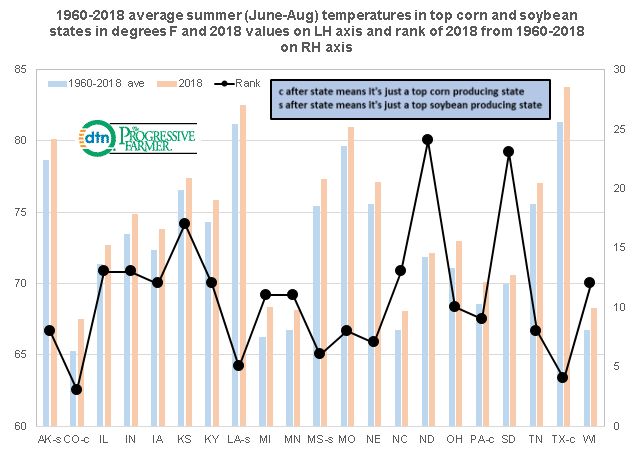