There continues to be ideas that though the USDA projected the 2018 U.S. corn yield at a record 178.4 bushels per acre (bpa) and soybeans at 51.6 bpa, the second highest ever, there is concern that elevated temperatures for much of the season are accelerating crop growth at the expense of yield.

This is reflected in a high rate of corn in the dent stage and soybeans setting pods as of mid-August.

This could be linked to elevated temperatures seen this summer and though we do not have the readings for August, we do have them for June and July.

This graphic shows June, July and then the combined average temperature for both 2018 and the 1960-2018 average for the top 21 corn and soybean states in degrees Fahrenheit.

In looking at the data we see that there was not one of the 21 top corn and/or soybean growing states had their average 2018 June/July temperature below the 1960-2018 average with the Plains and southern states having the most elevated readings.

For instance, the June and July 2018 temperatures in Colorado were respectively 66.5 and 69.9 degrees Fahrenheit for an average of 68.2 degrees, which is a very large 3.1 degrees above the 1960-2018 average June/July reading, and that average is the third hottest since 1960.

We see Louisiana had its fifth highest average June/July reading since 1960, MS and MO their sixth hottest reading, TN its fifth hottest and TX its fourth hottest, also a large 3.1 degrees above its average.

We see that the "I" states of IL, IA and IN saw their average June-July reading the 13th hottest since 1960 at around 1.5 degrees above average.

For a lot of the states, this was the hottest average June/July since 2012 and though this year's readings were not anywhere near what was seen that season, the fact is that the large number of record row crop yields seen in the U.S. over the past few season was, in many ways, attributable to the below average summer temperatures seen since 2012 but that is not the case this year. 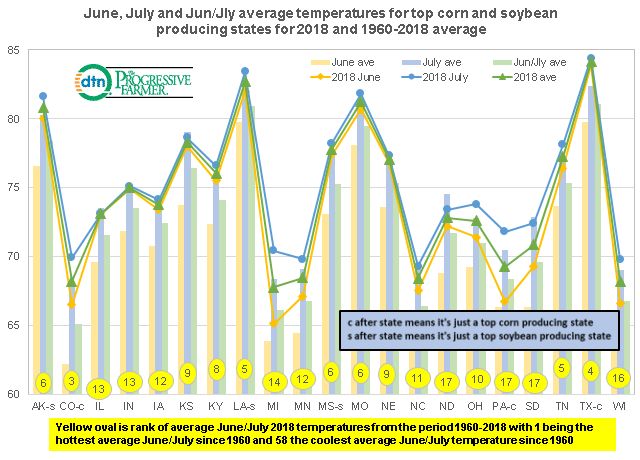