Very volatile action of late in wheat futures with drought in the U.S., Russia, Ukraine and Australia lending support, while the start of the winter wheat harvest here, along with trade jitters in all agricultural markets, has pressured values.

The fact is however, wheat prices are over a dollar per bushel higher now compared to the lows were made in the middle of November, and that surge in prices has done nothing at all to aid our export sales, which remain abysmal.

This piece looks at the amount of sales on the books of U.S. wheat as of the start of the marketing year June 1st in million bushels plotted on the left hand axis.

This year 98.0 million bushels of wheat were already sold as of the start of the marketing year, which is the lowest total since 91.9 million was sold back in the 2009/10 marketing season.

This represents a mere 10.3% of the 950 million bushels the USDA projected to be sold for the 2018/19 season as given in the WASDE report released earlier this week and this is also the lowest percent of the June WASDE export estimate since the 2009/10 year.

Part of the reason for this is the shrinking U.S. share of global wheat trade, projected earlier this week at a mere 14.1% which is the lowest percent at least going back to the 1996/97 season and probably longer.

Perhaps the only good news is that the USDA actually did increase this year's export projection by 25 million bushels based on deteriorating production prospects in the Black Sea area.

This is mostly due to a downgrading of the Russian crop, the world's largest wheat exporting nation and of further reductions occur this could increase both the U.S. wheat export total and our share of the global market. 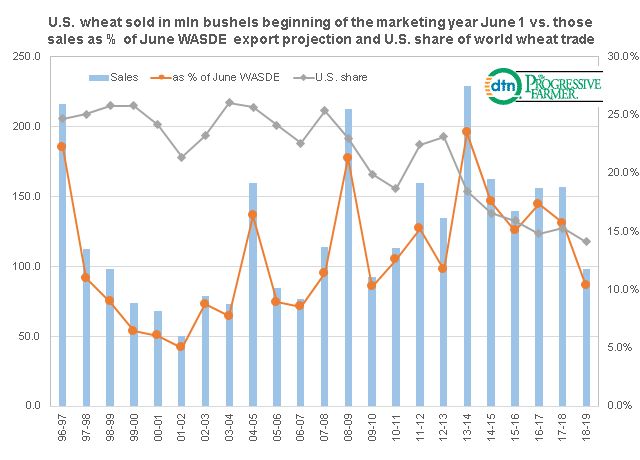