Despite a lagging sales pace amid heavy competition from foreign suppliers particularly Brazil, the USDA chose not to adjust their 2017/18 U.S. corn export projection from 1.925 billion bushels even though they did lower the U.S. soybean export estimate by 65 million bushels.

A look at U.S. corn sales and shipments as of the first week of January as a percent of the USDA's January WASDE export projection suggests there may be no reason to adjust that figure for now.

The latest export sales report showed total corn sales at 1.067 billion bushels so far this marketing year with the total shipped at 455 million bushels and they represent 55.4% and 23.6% respectively of the 1.925 billion export projection.

The pace of shipments however is worrisome as next to the 2015/16 figure of 23.2%, it is the lowest pace of shipments as of the first week of January as a percent of the January WASDE export projection going back to at least the 1989-90 season, though this may be due to a heavier soybean export program that is starting to abate.

As to whether the current sales and shipment pace provides justification for the USDA to lower exports, consider that two years ago when the sales pace was as mentioned 48.9%, final exports turned out to be 198 million bushels higher than the January WASDE projection based on a South American drought with similar concerns being registered this year.

On the other hand from 2009 to 2013, the average sales pace as of the first week of the year as a percent of the January WASDE projection was 52.7% and the average final exports were 82 million below the January USDA estimate.

It may be given the slow shipment pace that the USDA may at some point lower this year's exports though they may wait until March to see how the Argentine and safrinha Brazilian corn crops develop. 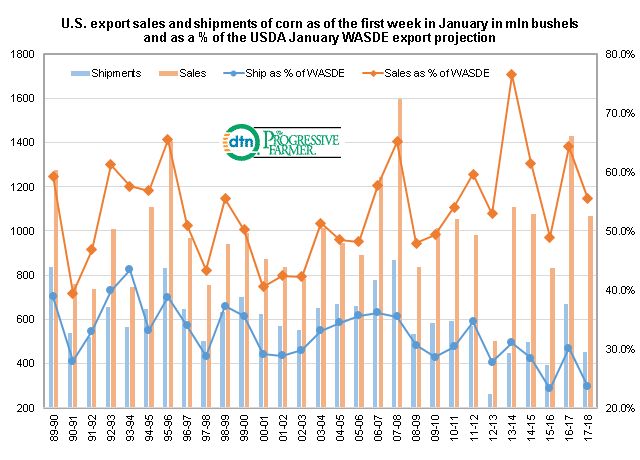