The USDA in its latest crop production report indicated that the 2017 corn yield would be a record 176.6 bushels per acre (bpa), 1.2 bpa above their November 2017 estimate and 2.0 bpa above the prior record set just the year prior.

The U.S. has now set back-to-back yield records for the first time since 2003 and 2004 with all-time high peaks set three out of the past four seasons.

As noted in prior posts, this yield record was particularly impressive in light of some adverse weather in 2017 through many of the top corn growing states.

There was heavy spring (March-May) rainfall in a number of states that delayed timely plantings while a horrific drought hit the Northern Plains including the states of North and South Dakota that have witnessed a large increase in corn planted acreage over the past decade.

Finally a good part of the Eastern Corn Belt endured a very dry second half of the summer though that seems to have had a more deleterious impact on soybean as opposed to corn yields in that part of the country.

This may explain why less than half the top 18 producing states had record yields as opposed to past years of national corn yields where the number of individual states attaining all-time yield peaks was often in double digits.

This graphic shows the number of the top 18 corn producing states setting new yield records vs. the percent that U.S. corn yields deviated from the 30-year trend.

The darker blue bars such as those for 2016 and 2017 are years of a record national corn yield.

The difference however is last year eight of the top 18 producing states had a record yield vs. seven in 2016.

This shows that the further above trend the final yield is the more likely that a greater number of states will set records.

This was certainly the case in 2009 when a yield 8.27% above trend had 12 states setting records or the blockbuster season of 2004 when a final yield 12.40% above trend had 13 states attaining record yields, both tops at least going back to 1981. 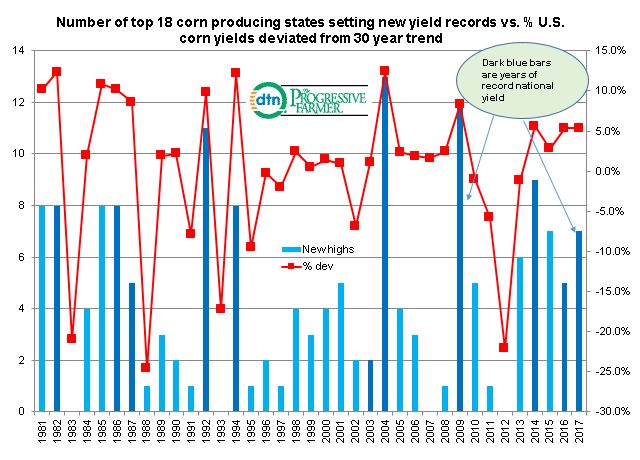