We see that the average trade guess for the 2017 U.S. soybean yield is 48.6 bushels per acre (bpa), a mere 0.6 bpa reduction from their August projection.

Even though the growing season is ending rather dry in much of the Eastern Corn Belt, steady crop ratings last month and a notable improvement in conditions west of the Mississippi suggests the U.S. will harvest a decent crop.

In fact there are only six states out of 18 that have crop ratings as of September 1st below their respective 1986-2016 average including IL, IN, IA, MI, ND and SD.

Of these, the Dakotas are the worst as they are in corn though 9 of the 18 top corn states have 2017 ratings below average as the soybean growing area is more geographically dispersed.

The Delta states seem to have had a particularly robust season with Tennessee having their highest Sep 1 rating ever at 815, a whopping 17.8% above the 30-year average with Arkansas 13% higher and Mississippi 13.1% better and Louisiana 7.8% above average. 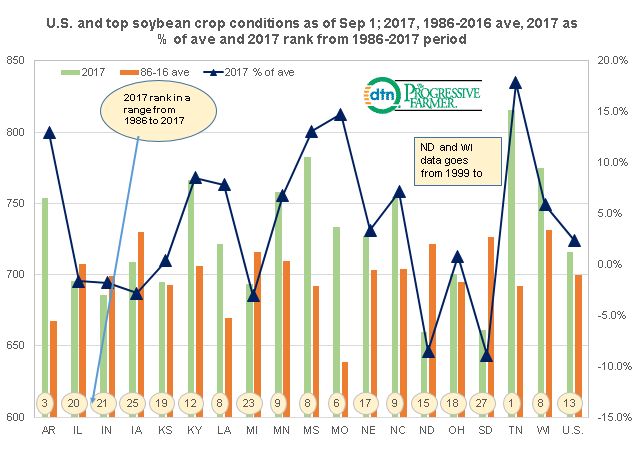