For the second month in a row USDA surprised the trade by posting higher than expected 2017 U.S. row crop yields, numbers actually above the August projections, yet there continues to be widespread doubts that this is the case, especially with the USDA indicating corn ear weights are the fifth highest ever and soybean pod weights the heaviest ever.

Looking at the summer as a whole however, cumulative June-August rainfall even in the driest states was at least 75% of the 1960-2016 average for all of the top 21 corn and soybean growing states though for the majority of the Midwestern states, 2016 summer precipitation was far more ample.

This graphic shows the total summer (June-August) rainfall in inches for 2017 and 2016 for the top 21 corn and soybean states with 15 growing both and Colorado, Pennsylvania and Texas just corn states and Arkansas, Louisiana and Mississippi just soybean states.

What stands our right away is how wet some of the southern states were over the summer, even before Hurricane Harvey.

Both Louisiana and Mississippi had their highest amount of precipitation over the past three months since at least 1960 with Texas having their third greatest amount and Arkansas the fifth largest.

On the other hand Iowa had just 77.1% of their normal June-August rainfall as did North Dakota making it the seventh and eighth driest summer periods respectively since 1960 for those two states.

Other states that trended dry include Illinois, Kansas, Nebraska, and South Dakota.

The bottom line is that while the summer of 2017 may be the driest since 2012, national corn and soybean production will still be more than adequate which given large beginning stocks and ample global supplies is more than enough to keep futures prices pinned close to multi-year lows. 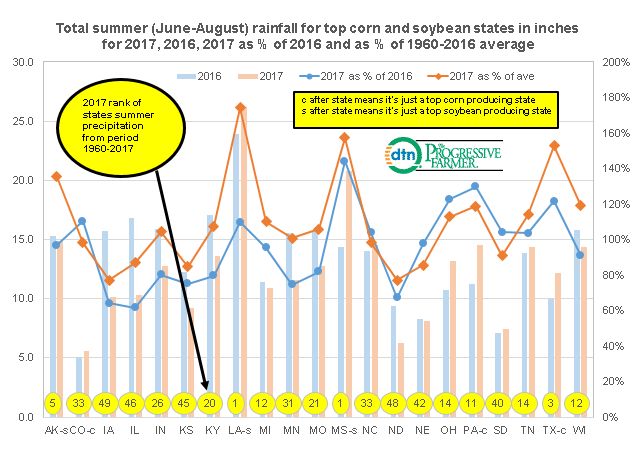