A number of reasons have been advanced on why soybean futures are rallying with the outlook for South American production this year becoming quite optimistic.

Fund buying, lack of selling by Brazilian farmers and ideas that China will be purchasing some large parcels of soybeans after coming back from their New Year festivities are some of the most mentioned factors.

There has also been talk that with the USDA having consistently understated final demand for U.S. soybeans over the years this trend will continue.

The USDA has for sure taken some heat for this but in reality do they or anyone else for that matter really know what final combined soybean output will be in Brazil and Argentina, respectively the world's second and third largest soybean producing countries in the world next to the U.S. months before the final bushels are harvested.

This is important in that a shortfall in their production has major implications for U.S. soybean exports and crushing pace.

It is true that the USDA has pared its U.S. soybean ending stock projection from the January to the September WASDE reports for five straight seasons and actually for 14 of the past 17 seasons.

Since the 2002-03 season, this has happened ten times and eight of those times there was also a corresponding decline in South American soybean production.

The correlation between the two is a not so great 41% but there is still some connection.

We would also argue that the USDA has also tended to understate final Chinese demand for soybeans, which has been insatiable over the past number of years. 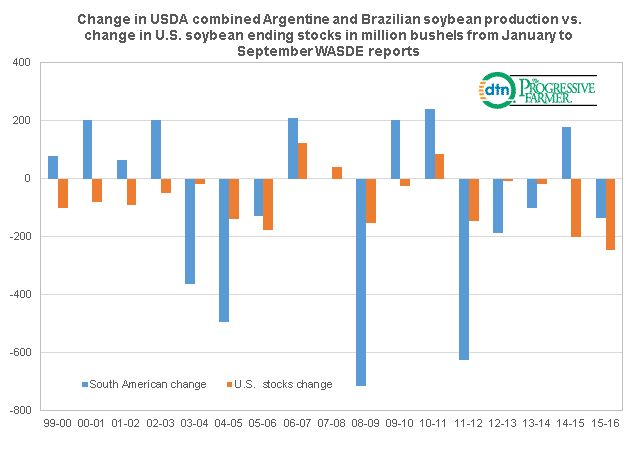