In its January WASDE report, the USDA pared its 2016/17 U.S. soybean meal export projection by 200,000 tons based on lagging sales to date but given the still sluggish export pace, additional reductions may be seen down the road.

This graphic shows U.S. soybean meal export and shipments as of last week in January in thousand short tons and as percent of January WASDE export projection.

The latest export sales report pegged current soybean meal exports at 7.363 million tons with shipments a mere 3.497 million tons and both of these are the lowest totals in five years.

The export pace is the lowest in five years but the shipment pace is actually the lowest since the 2006/07 season and the second lowest at least going back to the 1999-2000 marketing year.

Reasons for the slow pace of sales and shipments is an abundance of other feed products including other high protein meals and distillers grains, headwinds created by a strong U.S. dollar that until recently was hovering near 14 year highs and a generally optimistic assessment of this year's South American soybean crop.

In this regard, the soybean meal market last month had rallied to its highest levels since last summer on fears of weather related crop damage to the Argentine crop, the world's largest soybean meal exporter.

Things have improved however as soybean crop estimates that a month ago were starting to fall below 50 mln tonnes are now seen in range of 53-54 mln, perhaps higher and this could perpetuate the sluggish soybean meal sales and shipment pace and likely lead to additional cuts in the USDA's export projection. 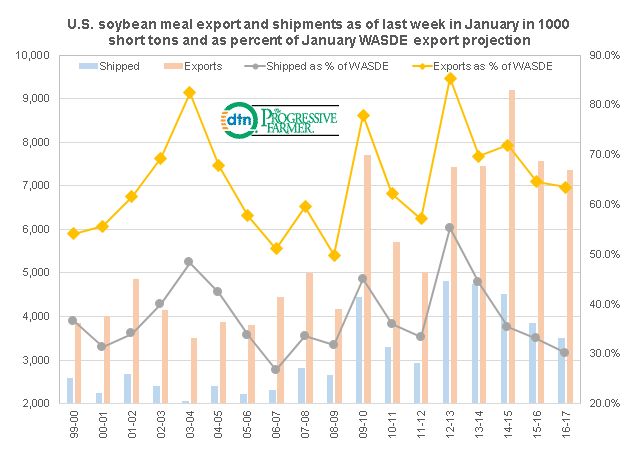