First wheat at contract lows, then corn, and now it appears that the soy complex has given up the ghost.

This week's dome of death appears to be more fluff than substance as readings, albeit the highest in four years throughout the Midwest, were not as extreme as had been forecasted, while precipitation was quite ample this past week.

Meanwhile the forecast for the next two weeks looks favorable as soybeans continue to progress through their critical flowering and pod-setting stage.

Whether it is the 2nd highest national crop ratings since 1994, sentiment that the much feared La Nina event could be a bust or signs that Chinese soybean import demand may be far less than projected, soybeans and soybean meal in particular have taken quite a beating.

In this piece we look at the individual 18 states that make up the national soybean crop rating using our usual ratings system where we weight the crop based on the percent in each category and assign that category a factor of 2 for very poor, 4 for poor, 6 for fair, 8 for good, and 10 for excellent and then sum the results.

Interestingly, despite current national conditions among the best in 22 years, only Wisconsin has a crop rating that is the highest since the current condition report format started in 1986, though a number of states including IN, LA, MN, MO and TN have their fourth best rating ever for this time of year.

This suggests that the general soybean crop in the U.S. is doing quite well and more states have week 28 crop ratings in the top 20% of the past 30 years of ratings than corn offering further evidence that the 2016 U.S. soybean crop has record yield potential. 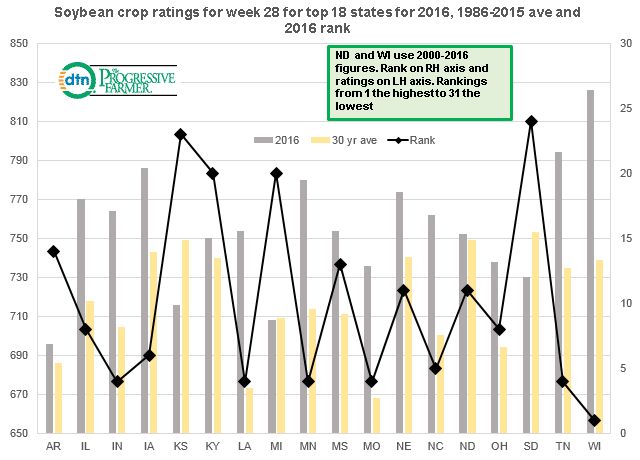