Despite the hottest Midwest temperatures in four years, the fact that readings were not as intense as had been forecasted with generally decent rains kept U.S. corn crop conditions unchanged in the latest USDA crop condition and progress report.

The combined good or excellent rating was still 76% and using our usual ratings system (where we weight the crop based on the percent in each category and assign that category a factor of 2 for very poor, 4 for poor, 6 for fair, 8 for good, and 10 for excellent and then sum the results) a crop rating of 778 was obtained for week 29.

We should add that all those five years saw not only record yields but final yields well above their respective 25 year trend averaging a whopping 9.6% above trend.

This graphic shows a scatterplot of U.S. corn crop conditions as of week 29 vs. the percent that final yields deviated from the 25 year trend.

The trend line statistics indicate that national crop conditions as of week 29 (about the third week of July) explain about 76% of the variability in final corn yields.

Just using a simple 25 year trend results in a prospective 2016 trend yield of 165.5 bushels per acre.

This times 1.0623 results in a prospective yield of 175.8 bushels per acre which is above the 170-172 bpa figure being bandied around by the trade.

Note that two years ago the 2014 rating was even higher but final yields were only 5.8% above trend.

At this date with the vast majority of the national corn crop pollinated and now moving into the dough stage unless August weather were to turn excessively dry hampering the grain fill process it appears that a record yield above the current peak of 171.0 bpa set in 2014 appears to be in the cards. 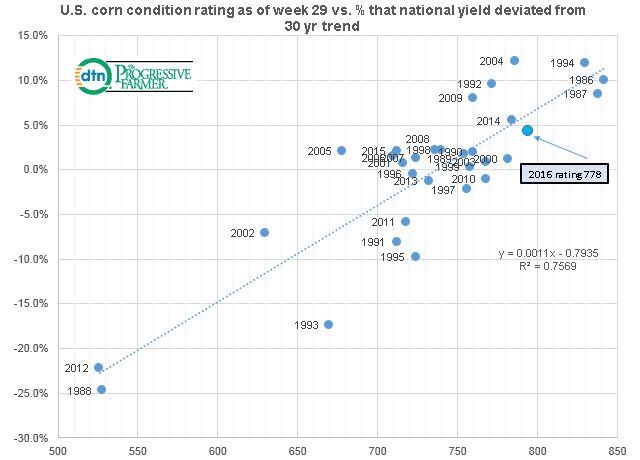