While the grain and oilseed markets are responding to forecasts of some very hot temperatures moving into the Midwest next week, it is interesting to note that NOAA has reported that the continental U.S. had its warmest June ever with the average at 71.8 degrees, 3.3 degrees above normal.

The market has had no real discernible reaction given that moisture last month was generally decent resulting in historically high crop ratings for the corn and soybean crops.

Still, these high temperatures may be adversely impacting corn in some subtle ways as recent articles have highlighted that elevated readings, particularly at night result in lower photosynthetic energy production.

This is more critical in the pollination and grain fill periods of development but could act as a drag on full yield potential even if high temperatures were seen in June when the corn plant for the most part is in its vegetative stage.

Note that all 21 states saw temperatures last month above their 65 year average with CO, KS, NE and SD seeing the largest differentials as all four of these Plains states along with Iowa and Missouri saw June temperatures much above average.

All of these states are seen having readings well in excess of triple digits when the big heat wave arrives next week and while all crop development will be hampered, plants in those areas that have been shortchanged by moisture the first half of July will be especially stressed. 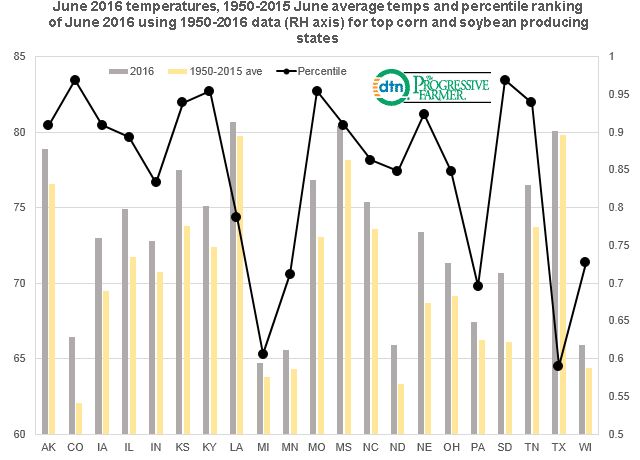