Though soybean crop ratings are not as high as those for corn, they are still quite good as USDA increased the part of the crop rated in the good or excellent categories by 1% this past week to 71% which is a historically high level.

Using our usual ratings system (where we weight the crop based on the percent in each category and assign that category a factor of 2 for very poor, 4 for poor, 6 for fair, 8 for good, and 10 for excellent and then sum the results) the latest reading is 756 vs. 726 a year ago and the five year average of 717.

In fact, this week's rating is tied with 2003 as the second highest rated soybean crop conditions for this time of year since 1999.

The attached graphic shows U.S. soybean crop ratings around the middle of July and then around then towards the end of September, a difference of about ten weeks, with the percent that final U.S. soybean yields deviated from the 30 year trend also charted.

As opposed to corn where a high crop rating around the 4th of July is often maintained through the Labor Day weekend, this is not the case for soybeans as this crop still has to go through its critical flowering and pod setting phase.

This can be seen in looking at past years of high ratings at this time of year such as 2014 and 1994 when high ratings were maintained resulting in yields well above trend at new record levels.

On the other hand, there are years such as 1999 and 2003 where crop ratings as of mid-July are exceedingly higher but weather problems (drought, wetness causing rust) results in a sharp deterioration in crop ratings by the end of September, resulting in yields well below trend.

So as opposed to corn where the window is starting to close on inflicting serious damage to this year's crop, for soybeans that window is wide open especially with fears of La Nina alive and well. 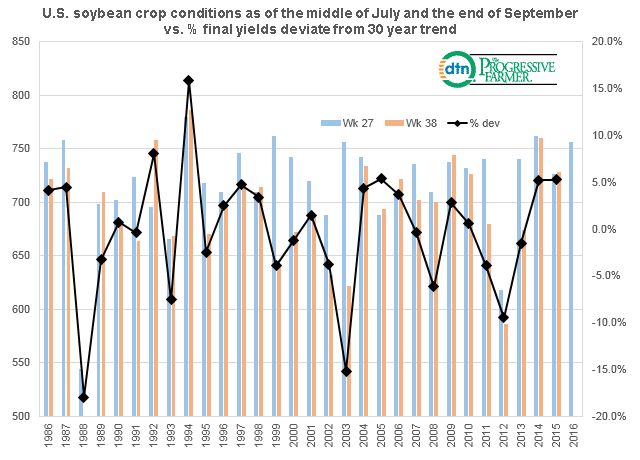