For the third week in a row, the trade has been surprised that the USDA's weekly crop progress and condition report has the U.S. corn crop rated at 75% good or excellent, a historically high level.

Using our usual ratings system where we weight the crop based on the percent in each category and assign that category a factor of 2 for very poor, 4 for poor, 6 for fair, 8 for good, and 10 for excellent and then sum the results the latest reading is 770.

The attached graphic shows U.S. corn crop ratings around the 4th of July holiday and then around the Labor Day holiday, a difference of about two months with the percent that final corn yields deviated from the 25 year trend also charted.

The dark blue columns represent those years such as 2016 where the crop rating around the 4th of July is at 770 or higher.

First observation is that this year's rating is the second highest for this time of year since 2004.

The second observation is that while having a high crop rating as of the beginning of July is no guarantee of a strong final yield since the critical pollination phase is just starting, it certainly helps.

Of the past nine years when crop ratings around the 4th of July were at this year's level of 770 or higher only one year did final yields fall below trend and that was in 1997 at 2.0% below trend.

The average all nine years is for yields to be 5.6% above trend which assuming the USDA's 168.0 bushel per acre (bpa) is a trend calculation would work out to 177.4 bpa. 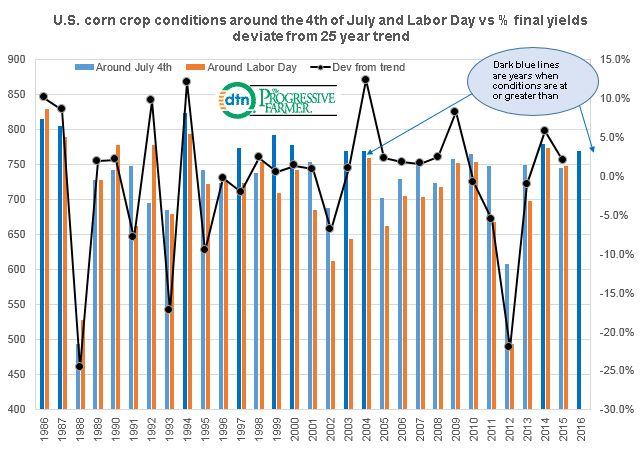