OMAHA (DTN) -- Grain companies with terminals along the lower Mississippi River are looking at shifting more of their committed grain and soybean exports to ports in the Pacific Northwest while damage assessments and repairs begin in earnest following Hurricane Ida.

Hurricane Ida brought significant wind damage across New Orleans and surrounding areas. The timeframe for resuming operations is unknown due to uncertainty of when electricity will be restored. Officials in some Louisiana parishes say some towns along the coast are uninhabitable.

Entergy, which provides power for much of the region around New Orleans, reported Thursday it had restored power to about 167,000 customers. That still left roughly 791,000 customers without power in the region. The company noted it was focusing on power for hospitals and key infrastructure areas such as wastewater facilities. Entergy noted the hardest-hit areas could be without power for weeks. The company now has pulled in emergency power line workers from at least 38 states.

Ida has shocked infrastructure systems from New Orleans to New York with widespread flooding across New York and New Jersey overnight. Beyond power, the biggest efforts around southern Louisiana continue to be rescues, along with getting food, water and fuel to those hit by the storm.

President Joe Biden, who will visit Louisiana on Friday, spoke at the White House Thursday about Ida's impact. He first praised the multi-billion-dollar federal investment in New Orleans' levees, which held. "It was strong. It worked."

Biden said the government still needs to do more to restore power, cell phone service and other lifelines to the region. "I get hourly updates on progress from FEMA, well into the night," he said.

As DTN reported earlier in the week, the power outages to refineries are expected to have a widespread ripple effect on gasoline and diesel prices nationally.

So far, there have been few assessments of the impact of storm damage on crop production in Louisiana or other states in the path of the storm. More details will emerge as roads become passable and power is restored to affected areas.

The Mississippi River is the major export channel for corn and soybean exports. The Port of South Louisiana is the country's leading grain shipping port, moving 1.7 billion bushels (bb) of soybeans and 1.5 bb of corn in 2020, which translated into about 65% of the country's soybean exports and roughly 55% of corn exports.

Ports in the Pacific Northwest do ship some corn and soybeans but are generally more geared to wheat exports. Still, CHS Inc. said Wednesday the cooperative is working to divert export shipments scheduled through the next month to its terminal in Kalama, Washington, after Ida knocked out a transmission line that powers its Myrtle Grove facility south of New Orleans.

Cargill Inc. reported it had damage at its Westwego, Louisiana, terminal, a 4.3 million-bushel (mb) capacity facility, and its Reserve, Louisiana, facility, which has 6 mb capacity.

There are no offers for corn bids in the Gulf and soybean bids are down 15 to 20 cents from last week. As expected, river basis is weaker given that the Gulf remains a mess and shuttered for now. There is nothing happening in barge freight nearby for the same reason.

Railroads that service Louisiana also have reported operations are still shut down. American Commercial Barge Line noted, "Transit delays are to be expected well into September as boats, fleets, terminals and shipyards recover from this hurricane."

Other barge lines noted the situation is "not good" right now and that it is likely nothing will move this week.

The Coast Guard has opened up a few sections of the Mississippi River, but also cautioned against a "large field of partially sunken barges" along the west bank of the lower part of the river south of New Orleans with a significant number of barges and vessels sunk or grounded elsewhere along the river.

The river is open from Mile Marker 167.5 (Sunshine Bridge) to Mile Marker 303 near Angola, Louisiana, but only for waivers approved by the Coast Guard for boats to move single barges back to fleets. The Corps of Engineers is doing channel surveys on Thursday. There are power lines and other obstructions in the river, which is obviously a safety hazard.

Editor's Note: Do you have a report on your farm's situation or agricultural business in the wake of Hurricane Ida? Reach out to DTN staff below. 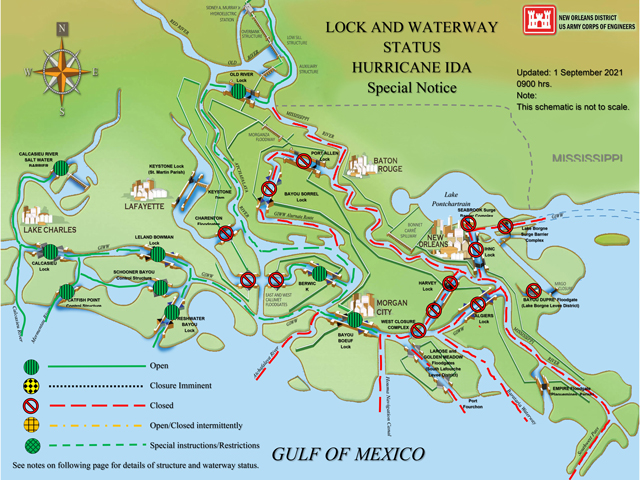